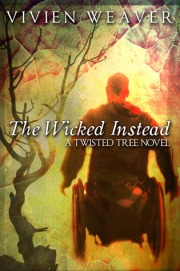 The Wicked Instead by debut author Vivien Weaver is the first book in the Twisted Tree series and the flagship publication for the recently launched Hard Limits Press. It is an urban fantasy that combines Ozark redneck “haint” culture with ancient Hungarian mythology and folklore to tell the uncommon coming of age story of brothers Cary and Lindsay Delaney.

Cary and Lindsay are as close as two brothers can be. Born in the Ozark Mountains region of Arkansas, they were raised on an isolated rural compound in a Christian fundamentalist environment by their overbearing father. Under his tutelage their childhood and adolescence was spent training to be Warriors of God in preparation for the Rapture. But a hunting accident that left Cary paraplegic changed their lives forever. Now estranged from their father and living in Missouri, Cary and Lindsay are on their own and rely on their instincts, their training and each other to survive, even if it involves illegal gun running to make ends meet.

A clandestine meeting with a group that they assume is interested in buying guns and the strange encounter that follows thrust Cary and Lindsay into the world of táltos (shamanic) magic where they learn that they are blessed with the title of princes and heirs to a magical world. The supporting structure of this and every world is The World Tree or Tree of Life. But The Tree is rotting and the brothers find themselves embroiled in a struggle for the health of The World Tree before the corruption reaches its heart. At first mistrustful of their new roles and the Táltos beings and other magical creatures that enter their lives to teach and guide them, Cary and Lindsay reluctantly embark on a journey traveling between the realms and through the three spheres to learn and master their magic in order to save The World Tree.

The story takes place in rural Missouri and Arkansas and the author fuses this temporal setting with pre-Christian Hungarian mythology to establish a parallel magical world. This world is divided into three spheres: the Upper World, the Middle World and the Under World. At the center of the world stands the Tree of Life with its foliage in the Upper World, its trunk located in the Middle World and the Under World is around its roots.

Written in the third person, the author alternates the perspectives of both Cary and Lindsey in this story. While personal introspection is used to develop the main protagonists, it is the author’s prevalent use of dialogue that reveals all of the secondary characters in this story, establishes much of the world building and advances the plot. This is complemented by subtle descriptions of the nature and nomenclature of this intricate parallel world.

What immediately caught my attention when I was offered this book for review was the striking cover and the unusual title, the latter of which is taken from Proverbs 11:8 which denotes that the righteous man will be rescued from trouble and it will befall the wicked instead.

There are many aspects of this story that I thoroughly enjoyed. First, it is off the beaten path, even for speculative fiction, in terms of the bringing together of otherwise divergent worlds and cultures and a host of unconventional primary and secondary characters to unfold the story. By far however, it is the characterization of Cary and Lindsay that I consider to be one of the key strengths of this novel. As a character-driven reader it was extremely easy to not only like these characters but also to become invested in them and their story from the very beginning of the book. I attribute this to the author’s honest portrayal of both men – their complexities, dreams, strengths, vulnerabilities and imperfections – and the exploration of the pervasive influence the culture in which they were raised had in shaping their worldview and how this worldview begins to change as a result of their journey.

Together, Cary and Lindsay both face challenges as a result of their difficult upbringing at the hands of an abusive father and the unyielding Christian fundamentalism in which they were raised. Much of their struggle involves coming to terms with the influence of their father’s “truth.” As they venture into the táltos world they begin to question their ingrained beliefs. They also face individual challenges. Cary is paraplegic and while he has, for the most part, accepted his reality the author candidly portrays both the physical and emotional challenges that Cary experiences in his daily living. Lindsay is gay, and while his family and friends suspect about his sexuality, he’s not out. His struggles are very much rooted in his extremist religious upbringing, which considers homosexuality an abomination, and his need to be true to himself and live his life honestly.

Another strong aspect of this story is the author’s intimate understanding and sincere depiction of Ozark culture, whether through Gray’s nuancing of its pragmatism, its ties to the land and the importance of loyalty toward loved ones; the dialogue which authentically captures the manner of the vernacular “haint” language; or the author’s depiction of the more unsavoury aspects of the culture – its inherent insularity and disdain of differences and often blatant racism and homophobia.

The táltos world is intricate and rich and in moving the plot forward the author achieves a fine balance between the temporal and magical settings as the brothers travel back and forth between the two realms. And as they discover and learn the mysteries and intricacies of this world so does the reader. On the surface the purpose of Cary and Lindsay’s journey is to learn and master their magic in order to fulfill their destiny and save The Tree of Life and by extension the worlds they inhabit. However, the brothers’ journey into the magical is also very much a metaphor for their venturing out into a world quite different from the one in which they were raised and how their discoveries, both through their experiences and the diversity of people they meet and come to care for, begin to shape them as men. In this sense and at its heart, this story is about two brothers coming to terms with a childhood that can easily be defined as abusive and letting go of the hurt caused by their father as they begin to come into their own.

For the most part, the use of dialogue as a means of world building and plot development works well, but there were instances in the book where I felt the plentiful conversations between and amongst the characters interrupted the story’s rhythm and flow. However, I consider this a relatively minor issue that is overshadowed by the strengths of this novel and in particular my investment in the characters of Cary and Lindsay and their journey.

As part of its stated mission Hard Limits Press wants to challenge convention by testing boundaries in speculative fiction. The Wicked Instead falls into this category and offers a refreshingly different approach through the intersection of not only disparate worlds, in this instance the fusion of Ozark culture with ancient Hungarian mythology, but also the bringing together uncommon protagonists and a diverse group of secondary characters.

Despite my issues with story tightness in certain parts of the book, overall, I found The Wicked Instead to be an engaging read and a good start to what I hope will be a continuing story involving these characters. I look forward to reading the next book in the Twisted Tree series.

The Wicked Instead by Vivien Weaver is available at Hard Limits Press.