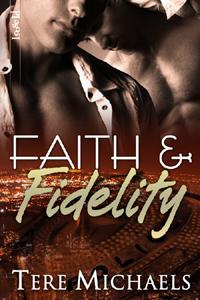 New York City Vice Detective Evan Cerelli has lost his wife in a car accident. She was his high school sweetheart, the only person he ever loved and the first and only person he ever slept with. He’s trying to get on with his life, build a life for his children, but is devastated by the loss and sinking. Former Homicide Detective Matt Haight has always been a ladies’ man, all sex with no commitment. He was pushed out of the police force after he tried to bring down a bad cop. He is bitter, depressed, going through a midlife crisis, not sure where his life is headed and is also sinking. The two find friendship in the bottom of a shared bottle. When the friendship turns to lust and then love, it shakes two straight men to the core and flips their lives inside out as they attempt to build a relationship and a life together.

It was almost 3:00 in the morning when I finished reading Faith & Fidelity and I felt compelled to write down my thoughts immediately. What does this say? Did I like this book? No. I loved it!

This story pulled me in from the very first page. It begins with the funeral of Evan’s wife (Sherri) and his first meeting with Matt. Both Evan and Matt, for all intents and purposes, are drowning emotionally and spiritually. Their relationship begins in honest friendship, each recognizing the others despair and loneliness, but mutual physical attraction starts to take root and both Evan and Matt are propelled on to an emotional roller coaster. As they try to deal with their lust for one another, the fact that they may be or are gay, and the reality that they are falling in love, they are also trying to deal with Evan’s grief over the loss of his wife and his fear about what his children, in-laws, friends and co-workers will think.

Tere Michaels is a very good writer. Her strength is in her characters and in particular their points of view. She writes both with emotional depth and intelligence. The dialogue between the characters is witty, crisp and above all else believably real. This story could have easily turned into something contrived, but it didn’t. Tere Michaels did not try to explain away the whys of Evan and Matt’s latent homosexuality, even though both characters experience much turmoil in dealing with this issue. I found this aspect of the story utterly refreshing. The underlying focus of this story is about two lonely and life-battered people who (regardless of their past heterosexual lives) reach out to one another, fall in love and try to build a relationship and life together.

This is Tere Michaels’ first published book, and if Faith & Fidelity is any indication of what she is capable of writing, she’s definitely an author I will be watching for in the future. She is in the process of writing her second book, a sequel to Faith & Fidelity featuring James a secondary character. I sincerely hope she writes more stories about Evan and Matt.

Faith & Fidelity by Tere Michaels is available at All Romance eBooks.