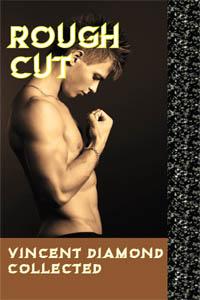 Rough Cut is a collection of seventeen short stories all written by Vincent Diamond, and edited by the author and Richard Labonté, of which, fifteen are connected and tell the continuing story of recurring characters.

In Lions and Tigers and Snares and Cold Hands, Warm Heart we are introduced to Byron Reese and Kendall Knight. Byron is a former licensed animal handler turned game commission officer working undercover on assignment at the Patacoochee Wildlife Refuge in north Florida. Byron is trying to solve a case of illegal trade of endangered and prohibited big cats. Kendall is the animal handler and co-owner of the refuge. Kendall’s business partner Ricardo Lopez is quite a vile man and Byron is trying to figure out whether Kendall is involved in this illegal trade, all the while trying to fight his attraction to Kendall.

I love big cats – lions, tigers, panthers, jaguars. There is an inherent sensuality in these animals, the essence of which is not only captured but also personified by Vincent in these two stories. I found sensuality in practically every aspect of these stories. Whether it was in the description of the park environment, the big cats, the movement and activities of the animals and humans, but most of all in the actions and interactions of the characters themselves.

“‘Take another hit,’ he said, his voice soft now. I did. I held his gaze this time, while the smoke curled into me. Kendall eased closer. ‘Give me some,’ and he opened his mouth, and I breathed some back into him. He took it in and stayed close, his lips against mine, just breathing each other for a few seconds.”

A Cold Night’s Sleep and Fire is the continuing story of Sandy Richter an ex-cop turned Warden in a Florida State Park and Mitchell B. Tanner an ex-con, just out of prison. Sandy was injured in the line of duty while trying to save three children from a burning building. He managed to save two of the children, but the one that was lost haunts him. Sandy was badly burned and scarred in the fire. He now lives a solitary existence in his cabin. Tanner is driving through the park when he crashes his car in a torrential rainstorm. He shows up at Sandy’s cabin injured and in need of help disrupting Sandy’s solitude.

For anyone who’s ever had a chance encounter with a total stranger (whether sexual or other) that left an indelible mark or changed you in some way by virtue of disrupting the familiar and safe patterns of your life, this story will resonate. Sandy’s need for human touch and interaction is palpable in this story yet he is also vulnerable, afraid and proud. Vincent truly captures the conflicting emotions in this character. Tanner has almost an intuitive sensitivity as to what Sandy needs even though they are strangers. He soothes Sandy, encourages him to let himself feel again, be touched again, changes him in some ways and helps him to heal in others.

Sandy and Tanner’s story truly touched my heart. There’s a part of me that wants their story to continue and there’s another part that doesn’t want to know more so I can let my imagination run wild.

“‘And how long has it been since anyone’s touched you?’ Sandy shook his head and turned back to the sink. No fair. Tanner stepped closer; the floor creaked as his bulk moved towards Sandy. Sandy felt the hair on his neck rise. When Tanner pressed against him, Sandy fought to stand still. He wanted to run away; he wanted to slap Tanner’s face; he wanted to grasp Tanner by the hips and fuck him like a stallion. Tanner slipped his arms around Sandy’s waist and just held him in silence.”

Seven of the short stories – Haunted, Slide Into Desire, Walking the Blue Line, Deep Trouble Under Cover, A Question of Taste, Dangerous Days and Tropical Daze – tell the tale of Steven Pershing and Conrad Stalton. Steven is an undercover cop for the Jacksonville PD and the DEA investigating a meth and Ecstacy ring in the illegal Rave scene. Conrad is a Rave Master DJ and ex-con, he is also Steven’s primary suspect. Steven joins Conrad’s crew helping set up the DJ table and all the speakers, and clearing the warehouse space for dancing. Steven’s never been with a man before but his first sexual encounter with Conrad has him completely tied up in knots – wanting and lusting for more with Conrad, feeling guilty and at the same time trying to do his job.

Of all the continuing stories Steven’s and Conrad’s is the most expansive in terms of time passage, character development and relationship growth. It is not difficult to fall in love with both these men, and equally to want more of their story. Vincent has mentioned that there will be a future full length book for Steven and Conrad and I most definitely will be reading it.

“I lay down gently, tried to settle in without waking him. Conrad pulled me close and spooned against me. He settled one hand around my waist, the other on my shoulder, his lips a comforting touch on my neck. I felt Conrad’s toes caress my own, intertwined and rubbing, warming the tops with his soles, holding my feet between his own. The touches were sensual and efficient all at once. It told me what I needed to know. This was something more than mere lust, something precious. I rubbed his toes too, pressed back against his broad chest and fell asleep, knowing he would be there when I woke. How far is too far? This was far enough.”

In Shepherd Vincent Diamond tells the story of Felipe Gonzalez imprisoned for criminal assault for avenging his father’s murder and his experiences during his first months of incarceration, including his first sexual encounter with a man named Carlos.

I loved this short story and although it is difficult to choose among the others, I believe it is my favourite in this collection. As the child of immigrants who struggled in a new land, and where the roles of parent and child were often reversed because of stark reality and necessity I completely related to Felipe’s character even though I am not of Latin origin. Vincent gives us much insight into Felipe through a very richly written point of view. I love who this character is and what he represents (to me) – strength, perseverance, a deep sense of self and family, honour and dignity.

“Sheep or wolf? Splotches of blood marked the concrete near the weight bench. Neither, Felipe decided. Shepherd.”

Bruised, Back in the Saddle and Horsing Around is the continuing story of Marcus Denton and David Livingston. Marcus owns a stud farm where he also trains horses for competition and David is a young veterinarian working as a vet on Marcus’ farm helping to take care of his horses. David has realized that he is gay and very attracted to Marcus. Marcus is gay, somewhat in the closet and still mourning the loss (through death) of his long-time partner. David helps patch up Marcus after he is thrown from his ride and the sparks begin to fly.

I had previously read Bruised and Back in the Saddle as Amazon Shorts and they were my introduction to Vincent Diamond. I thoroughly enjoyed revisiting Marcus and David. Their story is still as romantic as ever, easing and fluid.

“David ran his hands over Marcus’s shoulders—‘shush, shhh…’ the same way he settled a nervous horse, hands-on, hi voice quiet. As much as he wanted to push Marcus down on the desk, he moved with care, watching Marcus’s eyelashes flutter, brushing his fingers against eyebrows and cheeks and lips until Marcus gasped harshly and pulled David to his mouth. Marcus thumbed open David’s lips and when Marcus deliberately thrust in with his tongue, David felt his knees weaken.”

Irish Cream is the final story in this compilation and perhaps the most bitter sweet and emotional. It is the story of an older man remembering his young lover Liam and how they met and came together during the 1950s – a time of repression. Irish Cream will make you both wistfully smile and tear.

Richard Labonté, well-known and respected editor of gay erotica collections and anthologies contributed the foreword to this book, entitled, Smut with Heft and his introduction to the compilation quite eloquently captures the essence of this collection of stories, that they are “…linked by the passage of time, by emotional growth, and by the ebb and flow of homo relationships.”

I leave you with the final (and my most favoured) passage in this wonderfully written compilation of short stories, taken from Irish Cream:

“In the morning mist, the thunder of hooves came toward me, almost ominous. The horse whuffs and snorts and then she comes out of the fog, ghost-like, the rider balanced over her, back flat, rear out, legs bent, riding the rock of her gallop. Her nostrils flare open as she gouges in the ground. Dirt kicks up. I see them pass by and then they’re gone. And the wet on my face is just the mist.”