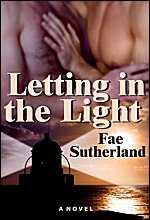 When Rowan Lee arrived in small, liberal Provincetown, he heard tales of the eccentric, brilliant, possibly insane Finnegan Clark. A world-famous mystery writer, Finnegan’s been to the top of the bestseller list more times than anyone can count. It’s about the only place he goes, sequestered away in his mansion by the sea.

Enter Rowan. The free-spirited lovechild of aging hippies, Rowan believes all anyone needs is love and when he makes a delivery to Finn’s mansion and meets the man himself, it’s infatuation at first sight. Not to mention lust. Never mind that Finn’s twice his age and snarls at him more than he speaks to him.

All Rowan wants is to make the world a better place, one person at a time, but all Finn wants is to be left alone. Sparks fly and if Rowan can’t break Finn’s walls down, he’ll burn them down … one sizzling encounter at a time.

Rowan Lee is fascinated with the best-selling author recluse that lives in a mansion by the sea in Ptown even though he’s never met the man. Everyone he works with at the bakery, including his roommate and best friend Jake Hanson, thinks Finnegan Clark is certifiable but Rowan doesn’t buy into the town gossip. Rowan finds out for himself when he makes a breakfast delivery to Finnegan’s mansion and has the door unceremoniously slammed in his face. But Rowan is not deterred by Finnegan’s outright rudeness because he’s just fallen in lust (and possibly love) at first sight with the gorgeous hunk of a silver fox. Ever persistent, Rowan won’t take no for an answer and decides to promptly deliver breakfast to Finnegan each morning in the hopes of getting to know him better.

Finnegan Clark is an acerbic, anti-social bear of a man that never suffers fools, and quite frankly prefers his own company to that of others. His priority is to write his next best seller and to be left alone. For the life of him he can’t understand why the kid from the bakery continues to show up and refuses to get the message and get lost. Even more of an irritation is the fact that Finn can’t stop thinking about him, which doesn’t bode well for his writing.

As they get to know one another over morning coffee and conversation, Rowan becomes more and more enamored with Finnegan despite warnings from his friend Jake to not get involved with him. And even though Finnegan continues to growl, Rowan doesn’t back down and isn’t afraid to call him on his rudeness. Rowan believes that under the gruffness Finnegan is really quite lonely and hides behind this rude facade to keep people at bay in order to protect himself. With this in mind, Rowan sets out to make Finn his project, to become his friend and hopefully a lot more because he’s seriously fallen for the man.

For his part, Finnegan continues his preoccupation with Rowan even though he won’t admit it to himself or to Rowan for that matter. And to make things worse, Finn’s muse steps in to constantly chide him for his rudeness and question his motives for pushing Rowan away. Finn finally succumbs and invites Rowan over and following their first bout of hot sex Rowan becomes an increasingly anticipated and much wanted presence in Finn’s life.

As Rowan patiently and cleverly insinuates himself more and more into Finnegan’s life, Finn opens himself up to Rowan and we learn of the reasons behind Finn’s self-imposed exile and why he prefers his solitude. But Finn has also made a difference in Rowan’s life. Observant in his own right, Finn teaches Rowan that he is not a “project” that needs fixing and holds a mirror up to Rowan to challenge him on his life pattern of never staying in one place for very long and thus by-passing opportunities for a committed relationship.

Letting in the Light by Fae Sutherland is the first book in her new Castles in the Air series. It is a delightfully heart-warming May/December romance and the stuff of which good M/M romance is made.

For me the strengths of this story lie in Sutherland’s exceptional writing of Rowan and Finn, their intelligent and witty dialogue and their personal introspection. The combination of which make this m/m story, the characters and their relationship believable.

In Rowan, Sutherland has written a witty, mature, fun loving and positive character that immediately attracts the reader. But, it is with the character of Finn that I believe Sutherland does some of her best writing, both in terms of dialogue and point of view. By his very disposition and circumstances Finn is introduced to us as an enigmatic and difficult man. And yet, he is a character that you are drawn to and feel very sympathetic toward from the very beginning. I attribute this to Sutherland’s subtle and well-nuanced characterization of Finn as she avoids many of the pitfalls of caricature.

Rowan and Finn couldn’t be more contrary and their differences are the source of much relationship angst and insecurity. Most obvious is their age difference (they are literally a generation apart) that dictates their very different life experiences and outlooks. Rowan is a free-spirit that always sees the glass as being half full and thinks that all you need is love to make the world a better place. Finn is a complicated and cynical man, his glass is half empty, and while he is not purposely mean, he certainly is not of the “touchy feely” emotional variety.

And yet despite these differences, there is much chemistry, both sexual and other, between Rowan and Finn and as a couple they fit. Again, I believe this is attributable to Sutherland’s intelligent and witty dialogue and deeply introspective points of view in her exploration of the individual characters and their relationship.

What I equally appreciated in this story is that the author didn’t compromise the fundamental attributes of each character, in particular Finn’s character, even after they fall in love. There is a tendency in the romance genre to sometimes alter the nature of a character under the auspices of being saved by love. In this instance Sutherland maintained the integrity and substance of Finn.

The one aspect of the story that didn’t really work for me was the resolution of the subplot involving Rowan and his friend Jake toward the end of the book. It was the one part in the story that was a little too over the top for my tastes. But I consider this a minor glitch in an otherwise thoroughly enjoyable story.

If you’ve got a hankering for a heart-warming, sweet and sexy read with two thoroughly engaging characters, intelligent and witty dialogue and plenty of hot m/m sex then Letting in the Light by Fae Sutherland should satisfy your craving.

Letting In The Light by Fae Sutherland is available at Amber Quill Press (Amber Allure).