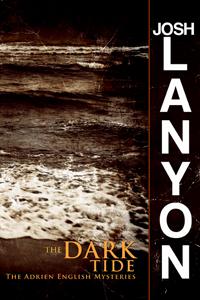 Myth has it that Adrien’s art deco period building houses more than his bookstore and flat in the form of an unsolved mystery – the disappearance of 1950s jazz musician Jay Stevens. But myth becomes stark reality when construction workers find a skeleton beneath the floorboards during the renovation of Adrien’s bookstore, and all evidence points to the fact that these remains are those of Jay Stevens and that he was murdered some fifty years ago. To further complicate matters, someone has been trying to break into Adrien’s building pointing to the probability that the murder and attempted nightly intrusions are somehow linked.

While the LAPD does show up to investigate, their resources are stretched and focused on current, rather than half a century old cold cases. But the nightly intrusions continue and Adrien is compelled to do something about the mystery himself since the LAPD is lukewarm on the matter. Adrien hires Jake who has quit the force and struck out on his own as a private investigator. Adrien and Jake once again become sleuthing partners, but the mystery is not the only thing that needs resolving. They quickly realize that they must come to terms with the many issues left hanging in their relationship all the while trying to not get themselves killed as they investigate the murder.

In the fifth and highly anticipated final book of the Adrien English Mysteries series, The Dark Tide, past meets present and Adrien and Jake come full circle as author Josh Lanyon gifts us with another mystery to solve and a most befitting ending to this highly acclaimed and popular series.

The mystery story itself is quite suspenseful and consistent with Lanyon’s writing of all the mysteries in this series. The author introduces a host of intriguing secondary characters that serve as potential suspects and that keep the reader guessing right up until almost the very end of the story.

In this particular book Lanyon pays homage to renowned mystery author and screenwriter Raymond Chandler. From previous books in the series we know that Adrien, being a mystery writer himself, is a big fan of the film noir genre and references to both film and the great literary mystery classics are interspersed in individual books throughout the series. What I found with The Dark Tide is that the feel of the entire story is very much in keeping with the great Hollywood film noir classics. Whereas, the images that the author’s writing conjured up for me in past books were in vivid colour, I visualized the entire story in The Dark Tide in black and white. There are many scenes that stand out in this regard, too numerous to mention, but one that I found to have truly captured the feel of the story for me is found almost at the end of the book:

“The tide pulsed against the naked shingles of bone white beach. The stark moon burned high above hanging from the rafters of clouds – an ugly, light bulb moon casting harsh chiaroscuro shadows on the sand dunes and crumbling, grassy hillside.”

If I were to pick overarching themes for this novel they would be a reckoning with the past, rebuilding and renewal. In my review of Death of a Pirate King (Book 4) I made reference to Jake’s double life crumbling like a house of cards around both he and Adrien. Their near death experience at the end of the book and the circumstances surrounding it, and the complete exposure of Jake’s secrets and by extension his life was for me very much a figurative levelling not only of Jake, but of Adrien and their relationship. In this sense, The Dark Tide represents the path to rebuilding and renewal.

There are elements of these themes that also find their way into the mystery story, but they are much more prevalent in respect of the characters of Adrien and Jake as individuals and together within the context of their relationship. Both Adrien and Jake must face their individual pasts. Adrien finally puts to rest his unresolved feelings surrounding his past relationships with Mel Davis and Guy Sutherland, and Jake must clean up the mess of his failed marriage and find some level of comfort within his family as a result of his coming out. Most important though they both must come to terms with the pain of their past choices and deeds within the context of their relationship and decide whether they have, or want, a future together.

With Jake’s coming out in both his personal and professional life, there are no longer any obstacles or hindrances for Adrien to actively pursue a relationship with him, and yet, Adrien remains quite hesitant and by all appearances undecided:

“‘I’m not blaming you for anything,’ I said, and there was no holding it back now. ‘Nothing. Not the … not wanting to acknowledge we were friends or that you even knew me, not walking out on me when you decided you wanted to marry, not … any of it. Not really. But …’ I hardened my voice. ‘I can’t go through it again. You changing your mind. Because I think you will, Jake. You’ve spent your entire life wanting to be Ward Cleaver, and I can’t see you giving that up this easily.'”

One of the aspects of Adrien’s continuing story which I feel was deftly handled by the author in this book is the resolution of his chronic illness. While Adrien’s heart condition certainly didn’t define him, it was a fundamental aspect of his life. Not only did his illness dictate what he was able to physically accomplish it also influenced his choices and decisions in respect of his life and his relationships. The author very thoughtfully captures Adrien’s realization that he must now relearn how to live his life with a renewed sense of health and well-being:

“The ironic thing about the surgery and the news that I was evidently going to make old bones after all was that I felt mortal in a way that I hadn’t for the last fifteen years.”

In keeping with the analogy of levelling, the author strips away Jake’s remaining protective layers to reveal him completely. Jake’s life has dramatically changed as a result of his coming out, and yet in many ways, the Jake that finally emerges has been before us all along.

“‘I’m sorry you were hurt. I’m sorry Paul hurt you. I’m sorry I hurt you.’ Straightforward, sincere, take it or leave it.”

Throughout the series the author has played with the concepts of hero and anti-hero in such a way as to blur the lines of their strict definitions in the characterization of Adrien and Jake – Adrien being the atypical hero to Jake’s complex anti-hero. In doing so he has created two extremely real characters that the reader can touch and feel. The author’s characterization in The Dark Tide not only maintains the integrity and authenticity of both Adrien and Jake as they finally face their past and make decisions as to their future, Lanyon writes an ending to the final book and the entire series that is most befitting of their story.

In the hundreds of gay fiction titles that I’ve read over the years there are a handful of characters that have remained with me. Adrien English and Jake Riordan take their rightful place within this group as characters that I will likely not forget and that from time to time I will revisit.

The Dark Tide by Josh Lanyon was an exceptional reading experience for me, as was the entire Adrien English Mystery Series as a whole. I highly recommend The Dark Tide but only if you’ve read the preceding four books: Fatal Shadows, A Dangerous Thing, The Hell You Say, and Death of a Pirate King. I thank the author for taking me on an incredible reading journey.

The Dark Tide: The Adrien English Mysteries (Book 5) by Josh Lanyon is available at Smashwords, Amazon, All Romance eBooks and at OmniLit.

Music: Fortress Around Your Heart – Sting (Dream of The Blue Turtles, 1985)