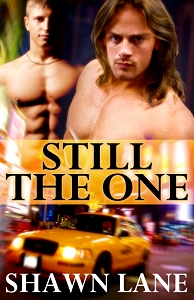 Best friends, Malcolm and Dusty, have been together as a happy couple for five years. But now Malcolm’s budding career as a stage actor has taken an exciting turn, sending him across the country to Broadway just as Dustin’s dream of being named Head Chef at the restaurant where he works is coming true.

As the distance tests their relationship, can their love and friendship survive? Can Malcolm find a way to prove to Dusty he’s still the one?

Still The One by Shawn Lane is the sequel to her short story The Best Gift and picks up some five years after Dustin Jones and Malcolm Rowland become lovers and a committed couple. They’ve been best friends and inseparable since high school and their relationship is a loving, strong and mutually supportive one.

Dusty’s passion is cooking. His career is advancing and he is in line for the Head Chef position at the restaurant in which he works. Malcolm has enjoyed success as an erotic romance writer but he’s also caught the theater bug and has become involved with a local theater troop in L.A. When Malcolm successfully auditions for a Broadway production he makes the decision to move to New York for the run of the play knowing that it’s not possible for Dusty to go with him. While Dusty is very supportive of Malcolm’s decision, as the months drag on he is missing Malcolm something awful. At the same time, the fame and success of Broadway are not what Malcolm expected. He desperately misses Dusty and questions whether his decision is worth sacrificing their relationship.

This short novella is well written and very much focused on the difficulties that Malcolm and Dusty experience when Malcolm relocates to New York City, the source of their relationship angst. The author balances the perspectives of both characters throughout the story by alternating their points of view as they struggle to maintain a long-distance relationship. Despite the story’s short length, some fifty pages, the characters are well developed and the author aptly conveys their strong commitment to one another.

Still The One is a sweet and romantic novella with lovable and engaging characters that I enjoyed revisiting. Despite the story premise, it provides a relatively light reading escape with some spicy sex and just enough angst to keep things interesting. Will Dusty and Malcolm get their HEA? You’ll have to read it for yourselves to find out.

Still The One can be read as a stand-alone novella, but for those interested in Dusty and Malcolm’s back-story and how they got together I suggest picking up The Best Gift before embarking on this one.

Still The One by Shawn Lane is available at Amber Quill Press (Amber Allure).