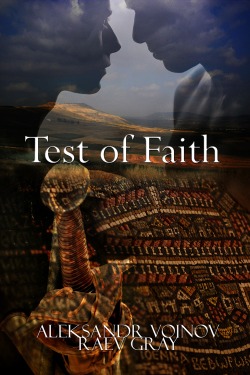 July, 1187: Saladin has defeated the Crusader army at The Horns of Hattin. While hundreds of his comrades have perished in the battle, Thierry de la Tour Rouge, a Frank and Templar Knight, has survived only to be taken prisoner by the Saracens. Thierry is living hell on earth, but he is alive and sure to stay that way if his ransom can be secured. The only thing those bloodthirsty heathens like more than spilling Christian blood is good Christian silver.

Parched, stripped of his armor and tied like an animal in a tent, Thierry fears torture in the attempt to break him and his faith. While he suspects that he has been bought and paid for, he doesn’t know why.

Abdul Basir is French by birth and a convert to Islam. As an advisor to Saladin, Abdul has been accepted by the Saracens and regarded with respect, but he will never be one of them. Thierry has been bought for him and while Abdul owns him, he cannot guarantee that Saladin will spare Thierry’s life.

In the spirit of acceptance and forgiveness and in the hopes of dying without torture, Thierry chastely kisses Abdul, hurtling them both into a clash of faiths and a contest of wills, one man motivated by the fulfillment of a fantasy and the other by the need to survive and keep his faith intact. In the process, they come to show each other mercy, kindness, mutual respect and trust – enough to reveal their desire for one another.

As Saladin holds the fate of Thierry’s life in his hands, can Abdul ensure the safety of this honorable crusader? Or will he have to find the strength and courage to let Thierry go in peace?

Test of Faith by Aleksandr Voinov and Raev Gray is an extremely well-written and emotionally charged novella that leaves the reader breathless.

The story is set against the backdrop of one of the most infamous and bloodiest battles of the interval period between the Second and Third Crusades – the Battle of Hattin – which took place near the city of Tiberius on the western shore of the Sea of Galilee. During the Battle the army of Saladin decimated some twenty thousand Crusading foot soldiers and one thousand Templar Knights capturing Christian King Guy of Jerusalem and the Holy Cross.

By some miracle, Templar Knight Thierry de la Tour Rouge remains alive but has been captured and taken prisoner by the Saracens. Bone-weary from battle, starving and almost delirious from dehydration Thierry finds himself tied up like an animal in the tent of Abdul Basir, advisor to Saladin. Saladin has bought Thierry for Abdul, but the reason for this is a mystery. Thierry fears torture, enslavement and ultimate death, but he is still alive and this provides a glimmer of hope that he will be ransomed. Thierry’s motivation is his faith and his life; to do what he must to stay alive long enough to be freed without having to succumb to tortured conversion. Abdul’s motivation for keeping Thierry is vested in fantasy, one that he is almost too proud to admit to, or to fulfil.

A chaste kiss on Thierry’s part changes everything and plunges both men into a clash of faiths, cultures and wills. As their polemic unfolds they learn of one another and come to show each other mercy, kindness, respect and trust, eventually revealing their desire for one another. But Thierry’s fate is in Saladin’s hands and Abdul is not sure that he can secure the safety of this honourable man, nor is he certain that he has the courage and strength to let him go in peace.

The overall plot is well established but does not dominate and the authors have paid meticulous attention to ensuring the historical, religious and cultural authenticity of this story. Everything from the historical events to the religious beliefs and customs (both Muslim and Catholic) is effortlessly and imperceptibly woven throughout the story.

The strengths of this story also lie in its characters and in this respect Test of Faith is very much character-driven. Written in the third person and alternating perspectives between Thierry and Abdul, the authors have crafted such multi-dimensional and sublime characters it is as if Voinov and Gray have respectively crawled into practically every crevice of Thierry and Abdul’s being to write their story.

Thierry and Abdul’s narratives are incredibly intimate revealing each character’s courage, pride, arrogance, honour, fears, hopes, compassion and desires as they negotiate not only their circumstances but also their fate. This is coupled with compelling and intelligent dialogue that at first is used as an instrument for their sparring, hatred and fear, and later for the tenderness and respect that Thierry and Abdul come to have for one other. The authors not only capture the fundamental essence of who these men are, but also their complexities. What stood out most is that while neither character compromises the core of who he is as a result of their tumultuous encounter, at the same time, both Thierry and Abdul are forever changed by it. In this respect, the title is most befitting the story not only in terms of the testing of Thierry and Abdul’s respective religious faith, but also their substance as men. In terms of sub-text, the characters also serve as conduits through which the authors more subtly infuse into the story and explore such timeless political themes as religious, ethnic and cultural chauvinism and hegemony.

Test of Faith is the first collaborative work by these authors and yet there is a symbiosis to this writing partnership that one doesn’t expect from a first-time collaboration. The writing is seamless and the story reads as if written by one person, so much so that despite my familiarity with Voinov’s previous works (this is Gray’s first published story) I was not able to pin-point which author wrote the character of Thierry and which the character of Abdul.

I do not consider Test of Faith as falling exclusively within the category of historical romance, rather more so within the realm of general historical fiction with strong erotic elements. Nonetheless, some readers may, and those readers that consider themselves romance genre “purists” may not be pleased with the fruition of this tale. However, I believe that the integrity of the writing simply demands that the ending, which I found to be utterly exquisite, is the only one possible for this story. Any other ending would have compromised not only the sense of realism with which this story is written but also the legitimacy and authenticity of the characters and by extension their circumstances.

Test of Faith is a powerful and passionate story, and Thierry and Abdul are at once both heroic and tragic characters that remain with the reader long after the story is finished.

Test of Faith by Aleksandr Voinov and Raev Gray is available at All Romance eBooks, Amazon, Lulu and Smashwords.