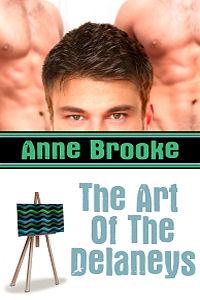 Liam is determined to prove to the Delaney twins that he’s more than just a good bed-partner for them. His chance to show them what he’s worth comes unexpectedly soon when his boss at the art gallery, Melissa, is asked by the Delaneys to take part in an art scam, and Liam agrees to help her.

When the Delaneys turn up with their henchmen on the night of the scam, Melissa and Liam are startled to discover that it will involve a painting by one of their best artists.

Can Liam make sure the gallery doesn’t get too seriously involved and keep the Delaneys satisfied, in the only way he knows how, at the same time?

In the third installment of Liam’s sexual escapades with sexy gangsters Mark and Johnny Delaney, Liam finally admits to himself that he has fallen for both twins and wants something more than just sex and entertainment with them. He sets out to prove that he’s worthy of a relationship by agreeing to take part in an art scam orchestrated by the twins, and in the process drops a proverbial bomb on Mark and Johnny that may change everything.

The writing of Liam is the strength of this series and in this third installment Liam remains in rare form. I continue to enjoy his wit and sarcasm, and his bumbling as he tries to impress the twins provides for some laugh out loud moments in the story. The element of danger that the twins present because of their life in organized crime has always been a turn on for Liam, but until now his relationship with them has been exclusively a sexual one and shielded from their “business” activities. In The Art of The Delaneys Liam crosses the line and enters the twins’ world as a willing participant in their scam as a means of gaining their trust and respect and perhaps even a measure of closeness to them beyond the sex.

Another strength of this series is the characterization of Mark and Johnny as seen through Liam’s eyes. With each story Brooke reveals a little more of each twin and the dynamics of their relationship as brothers, but not enough to completely remove the air of mystery that surrounds them. This continues to serve as an effective lever in maintaining the sexual tension within the threesome, as well as to create a sense of unpredictability as to their reactions to Liam’s antics. Brooke takes this to the next level in The Art of The Delaneys when Liam once again throws the twins a curve, and through their reactions we not only learn more about each twin, in particular Mark, but also of their feelings for Liam.

The Art of The Delaneys by Anne Brooke is available at Amber Quill (Amber Allure) Press.

NOTE: The complete review of The Art of The Delaneys by Anne Brooke is also published at Three Dollar Bill (TDB) Reviews.

2 thoughts on “The Art of The Delaneys by Anne Brooke”