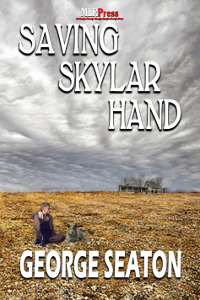 “Cody Pinnt’s sense of himself came early; valued the carousal of pubescence as an affirmation of his nature: Queer. No doubt about it. Didn’t linger on the implications. Took to wrestling as a worthy sport, befitting the use of his body strengthened and sculpted by the demands of a lifetime of work that began before sunrise and ended after sunset. The leveraging of that strength against others, the feel of sweat-soaked skin and nylon singlets, the smell of the battle, the more often than not sublime joy of the win, all of it barely satisfying a voraciousness to get on with it; life just moved too damn slowly in Big Spring for Cody Pinnt’s liking. Cody Pintt knew who he was early on. Knew where he wanted to go. Knew, too, the worth of Skylar Hand to his life.”

I readily admit that George Seaton is a favoured author in gay fiction and it is always a pleasure to read one of his stories. In his recently released novella, Saving Skylar Hand, Mr. Seaton gifts the reader with a beautifully written and tender holiday tale of lifelong friendship between two boys that are separated by the life choices they make as young adults, only to realize that their love for one another is immutable and that they cannot spend their lives apart.

Cody Pinnt and Skylar Hand have shared their lives upon the west-central Texas scrub since they were boys. Both were born to a cattle rancher’s life, however, their differing family circumstances dictate their respective world views, which take them down different paths. Cody’s mother nurtures his heady dreams of a future away from the land. These dreams lead him to leave their small town of Big Spring to attend Texas A & M with aspirations for the law. Skylar’s life has been marked by his father’s alcoholism and a life of poverty. His dreams are confined to what he has known his entire life. He sees worth only in trudging his days as his daddy has upon the land. Skylar chooses to stay in Big Spring and work their ranch the Iron Hand. Cody and Skylar’s love is sorely tested by their separation and life choices. However, under the watchful eye and guiding hand of Pete Semple, a defunct bull rider who works at the Iron Hand, both realize that they belong together.

“Skylar Hand, now having had endured almost nine months of nothing but cows, barbed wire, sunup to sunset toil, plagues of gritty dust finding even his ass crack, considered his present fate as an unanticipated unpleasantness. Niagara Falls sweat down his neck, back, and chest comingled with the dust and pooled in his once white briefs. Sassy heifers, rattlesnakes, his daddy’s less-than-patient demands, his mamma’s hound dog droop, his life on the land had devolved. In spite of the pain of it all, he waved a last good-bye to Cody Pinnt from the seat of the goddamned ancient John Deere that started half the time and the other half didn’t. Watched Mister Pinnt’s blue SUV with Cody in the backseat kick dust and pebbles as it headed toward College Station, Brazos County, where Cody would begin his matriculation. He sat for a while, let the John Deere sputter a threat to quietude. Felt the stifling presence of another dog day, flinched with the irritating bawl of a calf. Wondered what the hell he’d gotten himself into. He wished he was in that car sitting next to Cody and headed for anything other than what he now found himself immersed within. Realized for the first time since quitting high school that all those summer and spring vacations he’d helped his daddy out, spending entire days, hell, months working the ranch were always tempered by the certainty it’d all settle down to twice-a-day chores when school started up again. Now, as the John Deere did shake itself to death, he believed the call of the land looked fine from the perspective of impermanence. Now that it was permanent…”

Mr. Seaton’s writing is firmly rooted in the literary style and in this novella he fuses this style with elements of genre fiction, combining romance and the coming of age tropes to unfold the story. Written in the third person, Saving Skylar Hand is narrated from multiple-character perspectives. It begins with Skylar and Cody’s tenth Christmas and spans a period of sixteen years. One of the touchstone qualities of Mr. Seaton’s writing style is the fluidity of his prose. Cody and Skylar’s story unfolds seamlessly with each Christmas marking the passage of time, effortlessly drawing the reader into the events and experiences of their lives as they mature to adulthood.

The author ascribes an intimate and rich voice to both Skylar and Cody and their third-person introspection captures the fundamental nature of each character, their closeness, the depth of their feelings for one another and the emotional evolution of their relationship from best of friends in childhood to lovers as they mature into manhood. In particular, Mr. Seaton’s portrayal of Skylar is quite poignant and the author well-captures the poverty and abuse in his life and the sense of hopelessness that surrounds him. But Cody is always there for Skylar, whether to share his Christmas gifts with him, or to try and talk him out of quitting high school to work the ranch full-time. Over the years, an ancient Chinquapin Oak serves as their place of escape. The ancient tree shelters them, keeps their secrets and is a silent witness to their friendship and love.

Mr. Seaton often writes multiple character perspectives in his stories and he provides an expansive voice to several of the secondary characters in this novella, including the boys’ parents. One voice in particular that is omnipresent is that of Pete Semple’s. As a ranch hand he hovers on the periphery of family life at the Iron Hand ranch and is mostly an observer to the lives of these characters. But the tragic circumstances of a friend bull rider, which left a lingering impact on Pete, motivates him to do more than merely observe the goings on between Cody and Skylar and to actually provide a helping hand in getting the boys together. The story both begins and ends with Pete’s perspective and I felt that the omnipresence of this secondary character not only well-served the plot development, his voice also well-nuanced many of the central themes of this story – friendship, loyalty, acceptance and unconditional love. He is also an intriguing character in his own right with an untold story of his own.

Another quality of this author’s writing that I enjoyed in this story is his use of dialogue as a means of character development. The realistic dialogue and the manner of the vernacular language and idiomatic expression of the characters in this novella not only contribute to excellent characterization, but add texture to the story as a whole by also contributing to a genuine portrayal of the people and culture of rural and small town life in central-west Texas.

In reviews of his previous works I have often remarked on the fluidity, beauty and power of Mr. Seaton’s words as staple qualities of his writing. These qualities are readily found in this novella. Saving Skylar Hand is both a moving and heartening story with a happy ending, and one that can be read not only during the holiday season, but all year round.

Saving Skylar Hand by George Seaton is available at MLR Press, All Romance eBooks and Amazon.