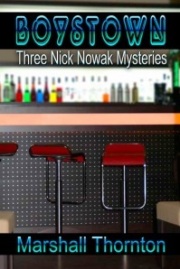 Boystown: Three Nick Nowak Mysteries by Marshall Thornton is the first book in this well-written and gritty detective series that is reminiscent of hardboiled crime fiction. The book is a compilation of three novella-length mysteries all set in Chicago, circa 1980-1981. The mysteries are engaging, and the writing features a captivating main character and sets an excellent overall mood for the stories.

Nick Nowak is a former cop turned private detective and part-time club bouncer, but not by choice. He was outed when he and his former boyfriend, Daniel Raverty, were victims of a violent gay bashing. His relationship with Daniel fell apart quickly thereafter and he was driven from the police force. Nick’s family subsequently rejected him and Chicago cops continue to harass him for being gay.

The main title of the series “Boystown” is named after Chicago’s gay village, which is also one of the main settings of the stories along with other Chicago environs. Each of the three mysteries is self-contained in that each is solved by story’s end and can easily be read as single titles. However, there is continuity in respect of Nick’s personal story, which progresses throughout the three mysteries. In the first story “Little Boy Found” Nick searches for a missing young man named Brian Peerson, on behalf of a mysterious client. In “Little Boy Burned” Nick investigates a case of arson at the popular gay nightspot where he is a part-time bouncer and in the final story “Little Boy Fallen” he goes undercover to prove that a dramatic suicide was actually murder.

All three mysteries are well written and each touches on issues of violence against gay men. The author provides a realistic portrayal of the nature of detective work in the early 1980s just before the dawn of the digital age, much of which is rather tedious. There are no computers, cellular phones, Internet search engines or GPS tracking systems to assist Nick in his detective work. Nick relies on his instincts and good old-fashioned sleuthing and legwork to solve his cases.

As interesting as are the mysteries, the draw of these stories is the compelling character of Nick. In keeping with the style of hardboiled detective fiction, the stories are narrated in the first person. There is an elemental quality to the prose, as Nick’s self-talk describes what he sees and does, and to a much lesser degree feels, that lends itself well to the excellent depiction of this character and his taciturn disposition. Nick is relatively dispassionate in his introspection never allowing himself to delve too deeply into his feelings. On the surface, he comes across as emotionally detached and often times cynical and world weary, but at the same time he is never cruel and has a strong sense of loyalty to his friends and the gay community writ large. While this disposition may be conducive to solving cases, it is less than desirable for those on the receiving end when Nick is interacting with them on a more personal level.

Nick engages in casual and indiscriminate sex with many men, including with friends and men he meets in a professional capacity while investigating his cases. Through this aspect of the character the author authentically captures the beliefs of the post Stonewall gay (sexual) liberation movement and culture of the 1970s, just before the full onslaught of the HIV/AIDS pandemic. The author also realistically captures the clash of these beliefs with those of heteronormative society by juxtaposing Nick’s self-possessed nature in respect of his sexuality and his fundamental right to sexual freedom with the extremely homophobic environment within which Nick lives and works.

With each story the author begins to peel back Nick’s layers with glimpses into his anger and resentment at the treatment by his family and Chicago police, and his underlying pain and loneliness at the loss of Daniel, although the character is remiss to fully admit to such feelings. By the final story the author introduces a new character, Detective Bert Harker, who is also a “brother” and provides Nick with a helping hand hinting at the possibilities of a romantic liaison between the two in the stories to come.

“We’d been together almost three years, Daniel Laverty and I. He was small, blond, and tightly muscled. I guess if I have a type, it’s because of Daniel. His eyes were the blue of a summer sky that clouded over whenever I made him unhappy. He had a way of laughing at me when I was mad that made everything I did or said seem silly. And he had a hundred ways of saying my name; ways that meant he loved me, that he expected more from me, that I was perfect, or awful, or just too ridiculous to take seriously. It was the best almost-three years of my life.”

Another aspect of the writing that I thoroughly enjoyed was the overall mood that the stories evoke. Everything from the description of Nick’s sparsely furnished apartment, the Chicago weather, to the author’s well-nuanced references to the music and political events of the time, not only serve to further draw out the character of Nick and his circumstances, but also to well-situate the place and time of the stories. In this, the author well-captures the social and political climate of the United States at the beginning of the 1980s, with the advent of the election of Ronald Regan as President and the wave of neo-conservatism that was to sweep the country as it entered a new decade.

I’ve wanted to read this series for a while and am quite pleased that I finally picked it up because I immensely enjoyed the first collection of stories, in particular getting to know the character of Nick. Mr. Thornton has gained a new reader in me and I plan on making my way through all the books published thus far, Boystown 2: Three Nick Nowak Mysteries, Boystown 3: Two Nick Nowak Mysteries; Boystown 4: A Time for Secrets; and Little Boy Dead: A Boystown Prequel, in anticipation of the release of the next book in the series, which I believe is slated for some time in April 2013.