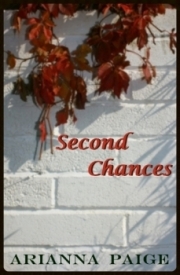 Second Chances by Arianna Paige is a short novella of less than fifty pages and the debut publication for this new author. It is the romance story of Richard Forrest and Adrian (Rain) Moore who meet up again by chance, and resume their relationship after a two year separation. What initially ended their friendship was Rain’s cocaine addiction. But Rain is now clean and sober, in recovery and trying his best to put his life back together.

Prior to Rain’s disappearance they had a close friendship, although it suffered because of Rain’s drug use. Despite the sexual tension between them, Richard was too afraid to admit to anyone that he is gay and to let Rain know that he’s in love with him. But when Richard finds out that Rain is drug free he welcomes him back into his life as a second chance at what he wants most – to be with Rain. He finally admits to his feelings and they agree to take things slow. Everything moves ahead in a fairy-tale manner until Rain’s all too familiar past behaviours start to resurface and Richard’s suspicions and fears threaten to tear them apart.

The story is written in the first person and narrated from Richard’s perspective in a non-linear fashion, alternating between the present and Richard’s memories of the past. It begins with promise and has all the right ingredients for an enjoyable romance tale of second chances at love and life. There was enough tension between Richard and Rain during the opening scene of the story – their initial reunion – for me to settle into what I anticipated was going to be a nice reading escape. While the story starts off on a high note and there were definitely aspects of the writing that I enjoyed throughout, unfortunately, I feel that the story fell slightly short of its promise.

What did work for me was the story’s theme of second chances for both characters. What can I say? I’m a sucker for stories of redemption and second chances. Overall, I also enjoyed the author’s voice. Characterisation was another positive aspect of the writing. I found both main characters to be quite sympathetic and appreciated the friends-to-lovers aspect of their relationship. I also liked the fact that both Richard and Rain are ordinary thirty-something guys trying to find some happiness in life.

Richard is portrayed as slightly uptight and cynical, and his narrative is often humorous. As the story progresses we learn of the reasons behind his fears and insecurities about his sexuality and coming out. Rain comes to light through Richard’s eyes. He’s easy going and a free-spirit of sorts, a good contrast to Richard’s more conservative nature, but at the same time quite serious about getting his life back in order and staying clean and sober. What I liked about Rain is that he owns up to his past mistakes and the pain he’s caused Richard and others, and works to make amends. He is patient and willing to go at Richard’s pace when it comes to their relationship. A cast of secondary characters, Richard’s sister and their close circle of friends, add elements of continuity and support to Richard and Rain’s relationship – both past and present.

What I feel was the overall shortcoming of this novella was the telling rather than the showing of the story. Through his narrative, Richard tells the reader of his feelings for Rain, how he was affected by Rain’s drug addiction in the past, his fears of coming out, and how their relationship is progressing. But because the writing relies on Richard’s telling of the couple’s life together the impression is that much of the character and relationship growth has occured off the written page. For this reason I wasn’t able to emotionally engage with each of the characters (even though they are both quite likeable) and their relationship story as much as I would have wanted. The telling rather than the showing of the story also affected its pacing. While Second Chances both begins and ends on a strong note, I felt that there were parts elsewhere in the story that lagged by comparison.

Second Chances was a fair to good read for me and despite my misgivings I did like the overall premise of the story, the author’s voice and the characters. Readers that enjoy a sweet romance with a fairy-tale feel and relatively little angst may wish to give this one a try.

Second Chances by Arianna Paige is available at Smashwords, Amazon and Barnes and Noble.