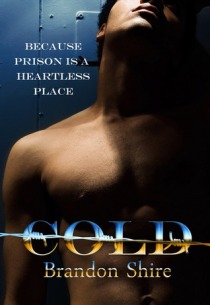 Cold by Brandon Shire is a contemporary gay romance that is set in prison and the first book in the continuing story of Lem Porter and Anderson Passero, who meet as inmates and get together for a short, but intense, period of four months. It is a well-written story of two very different men that are thrown together as a result of their incarceration, but otherwise would likely have never crossed paths. The strengths of this story are in Mr. Shire’s characterisation and in his portrayal of Lem and Anderson’s short-lived relationship and the eventuality of their separation.

Brian “Lem” Porter was sentenced to life in prison for the murder of his brother. With eighteen years already served, he’s been up for parole several times, but has always refused to cooperate with prison officials in making a case for his release. He doesn’t ever speak about his brother or the murder, and has resigned himself to spending the rest of his life behind bars. His only happiness is his job tending the plants in the prison’s makeshift green house, the closest he’ll ever come to his previous life’s work and passion of forestry. Given his massive physical size and taciturn nature, he plays up a threatening demeanour masking his shyness and introversion to keep the other inmates at bay and maintain his solitude.

Anderson Passero is serving an eight-year sentence for drug dealing. He unwittingly became implicated in this crime when he found out that his former boyfriend was selling drugs at Anderson’s popular gay club but did nothing about it. As a then high flyer in Atlanta’s night scene, his case was highly publicized in the news and as a result, Anderson’s homosexuality became public knowledge. He entered prison as an out gay man and quite scared for his safety among the incarcerated population. With just eight months left to his sentence, Anderson is transferred to Lem’s prison and to his relief a two-man room, rather than an open-style dorm. He is eager to go home and put prison life behind him, and just wants to survive the remaining months avoiding any trouble that could jeopardize his release.

Anderson first spots Lem upon his arrival at the new prison and immediately notices his physical size. Lem also takes notice of Anderson, however, they do not speak. A violent incident throws the two men together, and while Anderson is terrified of Lem, he is also attracted to him. Lem also wants Anderson, but can’t get past Anderson’s fear of him.

They circle each other for several months but eventually succumb to their mutual attraction. They carefully come together and in each other they find momentary comfort and a reprise from their own personal demons and the hopelessness and coldness of their surroundings, all the while knowing that their relationship will end when Anderson is released.

I was intrigued by the theme of this book – a love story that takes place in prison. Although the trope is not necessarily an overly common one in gay romance, it is one that enjoys a popular niche that, at times, can give way to cliché. However, Mr. Shire steers clear of formula and stereotype in the execution of this story. He also once again cuts his own path within the romance genre, bending some of its rules, for a more authentic portrayal of life in a minimum/medium security prison, focusing on the plight of the main characters and their relationship.

The story is written in the third person and the author alternates the perspective between each protagonist. Lyricism and rich description are staples of Mr. Shire’s writing style, but in Cold there is a minimalist quality to the prose that is quite effective in capturing the endless monotony and claustrophobia of prison life, and the constricted reality for its inhabitants even within a lower security-level prison setting.

While Anderson’s past and family life, the circumstances that led to his incarceration and his impending release are prevalent story points throughout the novel, it is the character of Lem that dominated this reader’s imagination. The character is written with subtlety and nuance showing his depth and dimensions. Mr. Shire slowly peels back this onion to reveal both a complicated and simple man. One that is capable of violence and tenderness, cold detachment and compassion. But the author doesn’t reveal all. The circumstances surrounding the murder of his brother remain a mystery throughout the novel, including at story’s end, and this only heightens the pull of this character. I consider the characterisation of Lem to be Mr. Shire at his writing best. Many of the qualities I love about this author’s writing converge in this character.

In sharp contrast to Lem’s self-possessed nature and quiet wisdom, the character of Anderson comes across as someone who is still searching for himself and is quite often self-absorbed. He appears emotionally stuck in the past, with very little evidence of self-awareness or growth as a result of such a seminal experience as prison. Anderson’s actions and reactions within prison are motivated by fear and he often gives the impression of a deer in headlights, which, in a prison setting would likely be a calling card for abuse and violence. The one issue I did have with this story and where I had to suspend fictional reality is that Anderson managed to remain relatively unharmed during his previous prison stay.

As with all of Mr. Shire’s works, this story has many layers. On the surface it is a tale of two very different men coming together for physical and emotional contact, sexual release and comfort in a place that is inhospitable to these human needs. Digging a little deeper however, this story is also very much about the journey of two men toward self-respect and self-love.

I have yet to read one of Mr. Shire’s titles that I did not enjoy and Cold is no exception, as the author delivers a compelling story that pulled me in from the very first paragraph. There is no happily-ever-after in Cold, the integrity of this story and its characters demand as much. The story ends on somewhat of a cliff-hanger and there is a sequel that continues Lem and Anderson’s story, entitled, Heart of Timber. However, despite my curiosity as to what will happen next, I feel that Cold can stand on its own merit and in many respects can be complete as a single title given the realism with which this story is written and the difficulties in sustaining relationships between the incarcerated and the newly released.

Cold by Brandon Shire is available at Smashwords, All Romance eBooks, Amazon and Barnes and Noble.

As with all of his titles, 10% of the proceeds from the sale of this book will be donated to two of Mr. Shire’s charities that help homeless LGBT youth – Lost-n-Found Youth, Inc., and GLBT Advocacy and Youth Services, Inc.