I’ve mentioned many times of my love for the anthology Fool or Love: New Gay Fiction and one of the reasons is that this compilation of short stories introduced me to several wonderful writers, one of whom is author, editor and graphic designer Jeffrey Ricker.

Since the publication of his first short story “At The End of A Leash” in Fool for Love, Jeffrey has contributed over a dozen short fiction titles to anthologies by some of the best known publishers of LGBTQ fiction, including in: Wilde Stories 2011: The Year’s Best in Gay Speculative Fiction (Lethe Press), The Lavender Menace: Tales of Queer Villainy (Northwest Press) and Foolish Hearts: New Gay Fiction (Cleis Press); as well as in numerous titles by Bold Strokes Books: Speaking Out: LGBTQ Youth Stand Up, Men of the Mean Streets: Gay Noir, Night Shadows: Queer Horror, Blood Sacraments: Gay Vampire Erotica, Raising Hell: Demonica Gay Erotica and Riding the Rails: Locomotive Lust and Carnal Cabooses.

Several of his single short fiction stories, such as, Maternal Instincts, Straightening Up and New Normal are available from Untreed Reads and he has also written non-fiction essays that appear in The Other Man (JMS Books), Paws and Reflect: A Special Bond between Man and Dog (Alyson Books) and in the upcoming A Family by Any Other Name: Exploring Queer Relationships (Touchwood Editions). 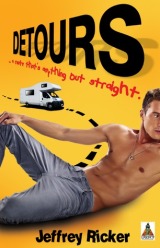 His first novel, Detours was published in 2011 by Bold Strokes Books, and on the occasion of the recent release of his second novel The Unwanted, Jeffrey was kind enough to accept an invitation to answer some questions here at Indie Reviews.

Indie Reviews: Welcome Jeffrey and congratulations on the release of The Unwanted.

Indie Reviews: The three main characters in this novel — Jamie, Billy, and Sarah — first appear in “The Trouble with Billy,” a short story that was published in Steve Berman’s anthology Speaking Out: LGBTQ Youth Stand Up. While the short story is contemporary fiction, The Unwanted falls squarely within the realm of fantasy. Did you have any idea at the time that you’d be writing a full-length novel involving these characters in a different sub-genre? Can you share some of your thoughts on the process of expanding the short story into novel form and of the transition from contemporary to fantasy young adult fiction?

Jeffrey Ricker: I actually did know, because I got the idea for the book before I started writing the story. I took the story as an opportunity to explore Jamie, Billy, and Sarah’s characters. Of course, a couple things have changed in between the story and the book, but writing the story helped me understand the characters better.

Indie Reviews: Although The Unwanted is a highly fantastical tale, the story is balanced between Jamie’s more personal journey and the action/adventure and inherent dangers of Jamie’s quest to fulfil the prophecy and save The Amazons. Was it difficult to achieve this balance?

Jeffrey Ricker: I think if I’d thought too much about it as an attempt to deliberately find that balance, I probably would have messed it up. Some of those aspects entered the story as I was writing it and weren’t necessarily in my outline or plan for the book. Jamie’s personal journey was always at the heart of it, though. Everything else grew from that. I can’t really write with an agenda in mind. The story arises as part of the process. There’s preparation and research, of course, but you can only anticipate so much. After it’s written the rest comes in the editing.

Indie Reviews: The mythological figures in this novel are not portrayed in a generic manner. While you assign each the attributes and roles traditionally ascribed to them in Greek mythology at the same time they emerge as well rounded characters. What was your process of researching these mythological figures and their legends for inclusion in the novel?

Jeffrey Ricker: I had a lot of fun with that. I brushed up on my mythology both before and as I was writing (like Jamie, it had been a long time for me since I’d learned about the Greek gods) and decided how I wanted to portray Athena and Artemis as far as personalities and motivation went.

When it came to the Amazons, I wasn’t able to find a lot written about them, which surprised me at first. But then when I considered that for the longest time most of the books on history and mythology were written by men, it’s no wonder that they got short shrift. (I was and remain mindful of the fact that, gay or not, I’m also a man writing about a strong female archetype.) That being said, this allowed me a great deal of leeway when it came to building their world.

Indie Reviews: The ending in The Unwanted was completely unexpected and definitely took me by surprise. While it is most befitting the integrity of the characters and story, you definitely took some risks. How early in the writing of the novel did the ending reveal itself? Were you at all nervous about reader reaction, since yours is a unique take on the more expected “happily-ever-after” especially within young adult fiction?

Jeffrey Ricker: I didn’t know the specifics of how it would end until quite late in the game. When it came time to write some of the climactic scenes, I actually stopped and thought, “Wait, can I do that?” I kind of surprised myself.

It’s funny, but I’m always leery of talking about the ending because I don’t want to give anything away. Hopefully readers will be surprised as well, but in a good way.

Indie Reviews: Since the 2009 publication of “At The End of A Leash,” in Fool for Love, you’ve been quite prolific having published numerous short stories and two novels across sub-genres including, contemporary fiction, romance, speculative fiction, erotica and now young adult fiction. Can you tell us a little about your creative process and what aspects of writing you find easier and which more challenging? How does a story evolve into a specific sub-genre? Are you more comfortable writing in certain sub-genres?

Jeffrey Ricker: I don’t really have a consistent writing process, to be honest. I try not to get too superstitious or precious about it—having to use a particular pen or sit at a certain table or write at a certain time every day. I just do whatever produces satisfactory results at the time, and if it’s not working, I do something else. I’ve hopped around a lot of different genres, and that keeps me interested in the practice of writing too. I’m more comfortable in some genres than others, sure—straightforward contemporary gay fiction is probably a comfort zone for me, which is why I’ve been doing all sorts of other things lately: speculative fiction, literary fiction, and YA fiction in particular. It’s good to get outside of that comfort zone.

Indie Reviews: I’ve read several if not most of your short stories, but one that stands out is “Tea” in Foolish Hearts. You definitely hit a nerve in respect of the sometimes-unfair randomness of life and some serious tears were shed on my part while reading this heart-rending story, and it’s one that continues to linger. What was the inspiration behind “Tea”?

Jeffrey Ricker: Life is random and unfair, isn’t it? That one is inspired a little bit by reality, embellished heavily with a lot of made-up stuff. When I was an undergraduate my family was stationed in London for four years, so I spent summers there. I find it much easier to work on a story if I can place it within a setting that I feel I know well.

Indie Reviews: Over the past two years you’ve been pursuing an MFA in Creative Writing at the University of British Columbia. What prompted you to return to university? In what ways do you feel that you’ve evolved as a writer as a result of this experience?

Jeffrey Ricker: Basically, I’d say going back to school has been the start of my second act in life. I think I’m taking more chances in my writing as a result, and am writing in different genres than I might typically have attempted. I’ve got a novel nearing completion that I’m pretty happy with, and in addition I have over a dozen short stories, a middle-grade science fiction novel, and a graphic novel in progress. It’s really inspired me to ramp up my output.

Indie Reviews: As an American that’s been living in Canada over the past two years I’m quite curious as to your impressions of our Great White North. Keeping in mind regional diversity, is there any one thing (good or bad) that stands out or that has surprised you about Canadian society and life?

Jeffrey Ricker: Since I’m in Vancouver, it’s more the Great Wet North than white here. I would hate to generalize, but I’d say the one thing that has really made an impact on me in my time here (and it’s not even specific to B.C.) is poutine. I love poutine. I could eat it every day. Sadly, the impact on my waistline has been noticeable.

Indie Reviews: LOL! I didn’t realize that poutine is so popular in British Columbia. You’ll have to come out east for the real thing though. I’m originally from Montréal and have certainly eaten my share of poutine, but the best poutine I’ve ever had is at a roadside chip wagon in Gatineau, western Québec, across the river from Ottawa.

Indie Reviews: What else is on the horizon in terms of your writing? Any works in progress that you wish to tell us about?

Jeffrey Ricker: I think I mostly mentioned them above, but I’ve also got a few things in progress that continue the stories I’ve begun in other works.

Indie Reviews: Jamie is a wonderful character to read. He is completely accessible to the reader and his journey is one of many lessons. What do you hope readers take away from the character of Jamie and his story in The Unwanted?

Jeffrey Ricker: One of the gratifying things from this book is hearing what people have taken from it. When I’m writing, I’m usually not mindful of trying to craft a take-away message or make a particular point. It’s only when I look back on what I’ve written that I can see the patterns. Basically, I just hope people enjoy reading it and find their own meaning in it.

Indie Reviews: Jeffrey, thank you so much for taking the time to participate in this Q & A. I wish you all the best with your writing, may the words always flow, and in the completion of your MFA, and look forward to reading more of your stories.

Jeffrey Ricker: Thanks! It’s been a pleasure.

The Unwanted by Jeffrey Ricker is available at Bold Strokes Books, Left Bank Books, Indiebound, Indigo-Chapters (Canada) and Amazon US and Canada.