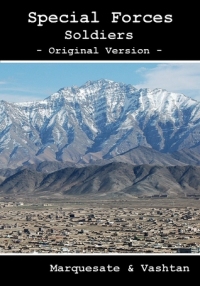 It took me a little over a month to read Cycle I of Special Forces entitled Soldiers (1980-1989), by co-authors Marquesate and Aleksandr Voinov (writing as Vashtan), all nineteen chapters and almost five hundred pages. I read Soldiers very slowly. It is anything but a light read so I managed a couple of chapters at a time and then had to stop reading and think about things.

Special Forces: Soldiers (1980-1989) is not gay romance or erotica, but it is a story of love, hate, violence, revenge, devotion, friendship and loyalty between Dan McFadyen an officer in the British Special Forces (SAS) and Vadim Krasnorada a Spetsnaz (Special Forces) officer of the Soviet Red Army. The backdrop of this story is the Soviet invasion and subsequent occupation of Afghanistan in 1979, the USSR’s eventual withdrawal from Afghanistan and events beyond.

The Historical Context:
In December 1979, under the rule of Secretary General Leonid Brezhnev, the Soviet Union invaded Afghanistan, to preserve a shaky Communist Afghan government (People’s Democratic Party of Afghanistan) that was being challenged by the growing popularity of Islamic fundamentalism (a reaction against Afghan communists) and the growing strength of the “mujahedeen” – Islamic holy warriors. The West (the United States under President Ronald Regan and Britain under Prime Minister Margaret Thatcher, as well as other allies) responded by sending arms and personnel to arm and train the mujahedeen to resist and fight against the Soviets.

In 1985, Mikhail Gorbachev became the Secretary General of the Communist Party of the Soviet Union. Considered a moderate within Party ranks, almost one year after his election, Mr. Gorbachev introduced the policy of glasnost’ (openness) in 1986, which relaxed some previously restrictive Soviet laws and policies on freedom of the press. In June 1987 he introduced perestroika a policy geared to fundamentally restructuring the Soviet economy and to a much lesser extent the political system. While the Soviet system had begun to crumble from within prior to Gorbachev’s rise to power, the introduction of these two policies precipitated the beginning of the end of Soviet communism.

Prompted by the stagnating Soviet centrally planned economy, the need to reduce military spending and improve relations with the West, and most important growing domestic discontent relating to the Afghanistan War within the Soviet Union, Gorbachev began to withdraw Soviet troops from Afghanistan in 1988, with a complete withdrawal in February of 1989. According to some statistics, the USSR sustained close to 26,000 army personnel casualties, of which close to 15,000 accounted for deaths. The number of Afghans killed (mujahedeen and non-combatants) is estimated between 1 and 1.5 million, with tens of thousands of others maimed and crippled. In many circles, Afghanistan was and still is considered the Soviet Union’s “Vietnam.”

It is important to note that during this period of time the rise in Islamic fundamentalism was not limited to Afghanistan. In 1979, neighbouring Iran overthrew the USA-backed Shah and installed an Islamic theocracy as government. The Iran-Iraq war broke out in the 1980s with Iran backed by the USSR and Iraq by the USA. In this context, the Cold War was being played out in the entire region. When the Soviet Army withdrew from Afghanistan in 1989, the USSR also withdrew almost all of its socio-economic aid to the country. Despite the amount of money designated by the US Congress in support of the mujahedeen, the USA did not provide much aid to Afghanistan after the Soviets withdrew. The completely destroyed and impoverished country that the Soviets left behind (and the rest of the world forgot) became fertile ground for Islamic fundamentalism to take root and grow. The mujahedeen morphed into the Taliban and the seeds of our current global geo-political situation were sown over two decades ago.

Dan and Vadim’s Story:
It is against the historical backdrop of the Soviet invasion of Afghanistan that Dan and Vadim meet in country in August 1980. They are enemies. Dan is in Afghanistan to train the mujahedeen in guerrilla warfare and Vadim is there to kill as many “holy warriors” as possible and ensure the survival of Afghan communism. Dan is doing recon one night and stumbles upon a drunk Vadim and his comrade-in-arms Vanya. Vadim is a habitual rapist. He overpowers Dan and rapes him. Vadim leaves his friend Vanya to have his turn with Dan. Dan overpowers Vanya and slices his throat. Dan then vows revenge – to kill Vadim.

This is how Dan and Vadim first meet. Through an incredible sequence of events and actions, Dan and Vadim become entwined. Their relationship, which spans almost a decade in Soldiers, is borne of brutal violence, hatred and revenge, then is transformed through need and growing respect, and ultimately through friendship, loyalty, devotion and love.

On the surface, Vadim is the quintessential Soviet man who is knowingly gay, but must lead, for the sake of appearances and self-preservation a normal life (homosexuality in the USSR was illegal and punishable by imprisonment in the gulag system or worse). Dan hides from himself on many levels. On the surface he is a misogynist and homophobe. Over the course of the story we witness the “deconstruction” of both Vadim and Dan. There are cracks in Vadim’s Soviet man and they begin to leak heavily. Dan’s unraveling is much more esoteric as he begins to come to grips with his sexuality.

This is probably one of the best works of fiction that I have ever read. Voinov and Marquesate have brilliantly created a most beautiful story of love between two men. It is a story of epic proportions. I cannot put into words the range of feelings and reactions that this story evokes. It was a complete assault on me as a reader. Every preconceived notion I may have had about anything relating to the issues that arise in this story has completely flown the coop. I found myself laughing, crying, completely and utterly repulsed, hopeful, scared. Most of all though, this story evoked (my) compassion for Vadim and Dan, for their love for one another, and for the impacts of the horrors and brutality of war on the human condition. Vadim and Dan mark each other. They take each other into their bodies and drink each others blood – both literally and figuratively. Yet, despite the brutality and violence that is inflicted upon each of them from within and without, their caring and love for one another is most tender, juxtaposed with the sex that they have which is often raw and violent.

Equally important, the story is historically accurate in terms of the situation and events in Afghanistan, the Soviet Union and Britain at that time, but also incredibly insightful in respect of the essence, psychology and ethos of the Soviet citizen, the Soviet man – Vadim. The authors’ understanding and nuancing of the psychology of the Soviet state is so accurate that, at first, I thought one or both of the authors were Russian, I have since been informed that they’re not.

Voinov and Marquesate have created two utterly unforgettable characters and have written a truly unforgettable story. If you can handle extreme violence, are a lover of political and military fiction and looking to read an incredible love story then Special Forces is a definite must read.

Soldiers (1980-1989) is the first of three cycles in the Special Forces epic, which of about one million words. The second cycle is entitled Mercenaries and the third Veterans. The original version of all three cycles of Special Forces and upon which this review of Soldiers (Cycle I) is based are available as a free online novel on Marquesate’s website: Soldiers (1980-1989), Mercenaries (1989-1993) and Veterans (1993-2006). All three cycles are also available in print at Lulu. A free online edited Director’s Cut version of Special Forces: Soldiers is also available at Aleksandr Voinov’s website.