Desert Sons by author Mark Kendrick traces the evolution of the relationship between Scott Faraday and Ryan St. Charles all the while exploring a gamut of realities and experiences, both good and bad, that gay adolescence faces in contemporary America: the fear of coming out and the reaction of family and friends; feelings of insecurity and alienation; the issue of suicide; the thrill of first-time sex and the coming into one’s own sexuality; the utter elation and euphoria of first love and the inevitable confusion of emotions that a love relationship brings with it.

Scott Faraday is sixteen and lives with his parents in Yucca Valley, California, where he attends high school and works part time at his family’s restaurant. His two passions in life are rappelling (rock climbing with extreme descent) and music. He rappels every chance he gets and is the sound man and sometimes lyricist and flute player for a local rock band – Centauri. Scott is gay and out only to his mom and aunt. Being gay is not an issue for him although he is cautious about whom he tells what with living in a small town and having to deal with small town minds. He wishes he were out to, and closer with, his dad and that his dad understood his need to study music and not business. Despite this, Scott’s life is pretty good, but it would be perfect if he could have sex and find himself a boyfriend.

Ryan St. Charles is a brash seventeen year old that has seen his share of life’s darker side. Both his parents died when he was ten and he and his younger brother Chris went to live with their grandmother in northern California. Ryan had a very difficult childhood and an equally troubled adolescence. He has many secrets. At sixteen, he became involved in an unhealthy relationship with an older man, even though he considers himself straight. Ryan has attempted suicide on several occasions. His latest attempt resulted in a totalled car and landed Ryan in the hospital. Not knowing what more to do, Ryan’s grandmother sends him to live with his uncle in Yucca Valley.

Scott and Ryan meet at Scott’s family restaurant and form a tentative friendship. Ryan is moody and abrasive, completely opposite Scott’s easygoing and friendly nature. Scott can’t quite figure Ryan out. As their friendship develops, Scott begins to suspect that Ryan might be hiding that he’s gay. Scott is sure Ryan has no idea that Scott is gay, so he comes out to him. Scott’s coming out to Ryan completely transforms their friendship into their first real love relationship. But Ryan’s hidden past eventually catches up with them. Scott is not at all prepared to deal with Ryan’s past and issues. Nonetheless, Scott stands by Ryan, and despite their differences, he learns more about himself and relationships he ever thought possible. Ryan in turn slowly begins to trust again and to believe that maybe, just maybe happiness is possible in his life. And over the course of a summer Scott and Ryan are forever changed. 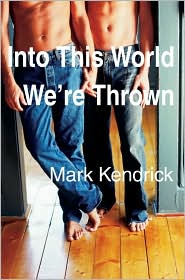 Mr. Kendrick continues Scott and Ryan’s story in the sequel Into This World We’re Thrown. No title is more befitting this sequel because in it both Scott and Ryan are thrust headlong into the world, into life. In Dessert Sons the boys spend almost all of their summer alone together as they explore each other and their relationship. They are very much cocooned in their own world. In the sequel their relationship becomes more public, there are lingering tensions as a result of their coming out, new challenges to face and some very difficult obstacles to overcome.

It’s Scott’s senior year of high school. His father is having difficulty accepting Scott is gay and continues to pressure him to study business in college. But all Scott can think about is being with Ryan, his love of music and the fact that his band may be breaking-up. To make matters worse the older man from Ryan’s past resurfaces in his life. But when Ryan’s grandmother dies it sends him spiralling into deep depression and he begins to question everything, including his relationship with Scott. At the same time that Scott is trying to deal with the possibility that his relationship with Ryan may be over, he learns of a very determined secret admirer at school who inevitably gets his attention and turns Scott’s head.

Where Desert Sons is focused on the coming together of Scott and Ryan as friends and then as lovers and the difficult process of their coming out, Into This World We’re Thrown more deeply tackles the stuff of real life, love and relationships that Scott and Ryan face as a result of their particular circumstances – depression, suicide, jealousy, infidelity, anger, resentment, hurt, faith, hope, commitment and love.

Desert Sons and its sequel Into This World We’re Thrown are by far the best novels I’ve read this year and without doubt the best coming of age story that I have ever had the privilege and pleasure of reading regardless of genre.

Mr. Kendrick has written this continuing story with heart and soul and the characters of Scott and Ryan with intelligence, integrity and above all respect for the perspectives, feelings, dreams and aspirations of two gay teenage boys as their journey of self-discovery, self-acceptance and eventual self-love takes them into manhood.

At its heart, this story tells the journey of two young gay men attempting to carve out a piece of land for themselves upon which they can stand tall and proud and can claim as their own. And so, we cheer Scott’s courage, trusting nature and forthrightness, and his outright refusal to apologize for who and what he is. Equally, we cry with Ryan as he comes to terms with all of the losses in his life and continuously encourage each of his small victories toward healing from a childhood of neglect and an adolescence of isolation. Finally, we celebrate both Scott and Ryan for the men that they want and need to be as they venture forth, together and as individuals, into the world and make their way through life.

I believe that Desert Sons and Into This World We’re Thrown are important contributions to contemporary American gay fiction. Both novels give voice to native sons that come from a place where a hardy and gnarled praying tree grows in a most desolate environment, and whose branches, according to legend, point to Joshua’s Promised Land. A land that metaphorically speaking is all too often out of their reach, and yet these very same sons venture forward with courage, hope and with a resilience born of the desert itself into a culture and society that is all too often inhospitable. In this, Desert Sons and Into This World We’re Thrown equally offer up an honest slice of contemporary Americana.

Desert Sons (2001) is Mr. Kendrick’s first published novel and Into This World We’re Thrown (2002) his second. He is an immensely talented author and both novels are superbly written. It is no surprise that both novels became best sellers upon their release.

Young or old, gay or straight, male or female – I cannot recommend Desert Sons and Into This World We’re Thrown enough. They are an altogether unforgettable reading experience.

Desert Sons and Into This World We’re Thrown by Mark Ian Kendrick are available at iUniverse Bookstore, Barnes and Noble and at Amazon.