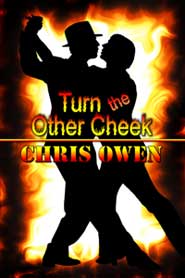 John “Mal” Mallory and Will Justason have moved past dating, though it’s still a race to hit the sheets every time they look at each other. Trouble is brewing, however, since hitting the sheets is a no-no for firefighters who work together. Will is ready to move forward, to tell the world that they’re together, but Mallory is still trying to keep their private lives to themselves.

With their careers on the line, Will’s brother pushing his own agenda and Mallory’s keen desire to live on his own terms, choices have to be made. Their work situation needs to change, and so does Mal’s attitude, or he’ll lose the one thing he wants more than anything in the world – Will.

Can a change of schedule save Mallory and Will’s relationship and send them dancing into their future, or will tension and frustration tear them apart forever when Will’s had enough?

Turn The Other Cheek is the sequel to Cheek To Cheek in which Chris Owen picks up Mal and Will’s story several months into their relationship.

No longer dating casually, Mal and Will have naturally progressed to the possibility of a deeper commitment. While in Cheek To Cheek Mal was initially hesitant to even begin a relationship with Will, and then troubled by the fact that they were dating and working together he has settled into seeing Will at work everyday and spending his days and evenings off with him. However, the fact that they’re romantically involved and working together is a real problem for both Mal and Will as it goes against the Fire Department’s policy.

Will’s brother forces their hand and they make a decision to speak to their Captain and request to be given schedules that will never have them sharing shifts, until one of them hires on with another fire station. This of course necessitates that they come out to their boss and co-workers which has Mal, and to a lesser degree Will, quite worried about the reaction and the fall-out from their fellow firemen. In addition, Will is ready to take their relationship to the next level, while Mal is still hesitant about making a deeper commitment. The strain that this puts on them coupled with the trouble that Will’s brother is causing because he disapproves of Will being in a biracial relationship with Mal adds great stress to their relationship and brings them to the brink of break-up.

As with the first book, Turn The Other Cheek is well written and told from Mal’s point of view. One of the distinguishing traits of this author is her ability to dig deep into her characters and provide rich character perspectives and this is exactly what she does with the character of Mal. Chris Owen delves into this character to provide the reader with an intimate glimpse of who he is and his evolution since Book 1.

A quiet and self-contained man, Mal continues to struggle with conflicting feelings about having people know his business. Contrary to what many think, including at times Will, Mal believes that he is not conflicted about being out as a bisexual man in a gay relationship. Rather, Mal is a private man and as such wants to keep the details of his personal life equally private. But in coming out to their Captain and co-workers this isn’t possible. Mal experiences a high level of anxiety about this much more so than Will even though in the end his fears are unfounded. While being scheduled on completely different shifts does cause some tensions in their relationship in particular because they rarely see each other anymore, by far it is the issue of Will’s need for a deeper commitment and Mal’s fear of it that causes the most strife between the two. Although Mal was initially hesitant to get involved in a serious relationship with Will so closely on the heels of his break-up with his ex Trish, he loves Will and has comfortably settled into their relationship. One of the more telling passages in the story that best captures Mal’s perspective and his need for privacy comes during a fight he’s having with Will.

“‘Oh, great. Here we go again.’ Mal stood up, ready to start pacing. Again. ‘It’s no one’s business. I am not fucking ashamed. I’m not ashamed of you, I’m not ashamed that I like sex with you, and I’m not—’ He waved his arm, at a loss for words. ‘I’m not ashamed. But I’m pretty fucking sick of people thinking I am. I’m not going to start wearing rainbows. I’m not marching in parades. I’m not going to hang a fucking gay pride flag from my balcony. But that doesn’t mean I’m ashamed. It means I live my life and I let others live theirs and I don’t fucking care what people think!'”

Owen pays equal attention to the development of Will’s character even though the narrative is written exclusively from Mal’s perspective. She achieves this through believable dialogue and the equally believable reactions Will has to Mal’s hesitancy. Although Will is ten years younger than Mal his ease with, and acceptance of, who and what he is make him a good counter-balance for Mal in that he challenges Mal and does not let him hide from the issues they need to deal with in their relationship.

“‘Do you care what I think?’ Will didn’t move, just looked up at him. ‘It hurts me that you let people go on thinking one thing when the opposite is true. I get it at work — trust me, I get that.’ He nodded, apparently to himself. ‘But when we’re out and no one from our shift is there to see? I expect to be treated like I’m your lover. Your partner. Someone you’re proud to be with. If that’s asking for a bit of gay pride, then it is. I think I’m worth it.'”

The chemistry between the two continues to sizzle in the sequel, both in and out of bed. And while I was not all together convinced that Mal’s conflict and hesitancy was a result of his need for privacy and not his level of (dis)comfort at being out, or perhaps a combination of both, Owen’s more realistic portrayal of their relationship, fights, make-up sex and all make this story quite an enjoyable read.

Turn The Other Cheek is another good m/m romance by this author with some depth, great characters, excellent dialogue, sizzling sex and enough angst to keep things interesting. I enjoyed revisiting Mal and Will’s story.

For those interested in picking up Turn The Other Cheek, I suggest reading Cheek To Cheek first in order to gain a better understanding of the characters and their back story.

Turn The Other Cheek by Chris Owen is available at Torquere Press.