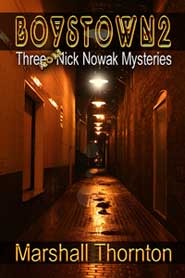 I finished Marshall Thornton’s Boystown: Three Nick Nowak Mysteries earlier this year and after reading the first compilation of novellas in this extremely well written series, the main protagonist Nick Nowak is a character that lingers and has gotten under my skin. No other way to describe the effect of this character and his continuing story. At the first opportunity to do so, I picked up and pretty much devoured the second instalment in one sitting.

The first story in Boystown 2 takes place in the summer of 1981 and together, the three stories span a period of approximately four months to late fall of the same year. It’s been two months since Nick broke his leg trying to nab a murderer and almost getting himself killed in the process. Although he’s still in some pain and needs a cane to get around, his leg is on the mend. Detective Bert Harker of the Chicago Police Department has become a somewhat more permanent fixture in Nick’s life, but the re-appearance of his ex, Daniel Laverty, has Nick conflicted about his still very strong feelings for Daniel while he’s in a relationship of sorts with Bert.

The mysteries continue to be well written, if not better written than the first set of stories in the initial compilation and the author’s writing style remains consistent. The elemental quality of Nick’s first person narration and his cynicism continue to set a somewhat solemn mood for all the stories. I found the plots to be more intricate in this second trilogy of stories and Nick’s sleuthing techniques more elaborate in order to solve his cases. By the third story, Nick’s gone undercover posing as a homeless person to find the runaway teen before the young man’s attempted killer does. While Nick solves all three cases, the last mystery is not fully resolved and it appears that the plot of the serial killer will continue in the next installment of stories.

The author also continues to slowly peel back the layers of the extremely well written character of Nick. Despite Nick’s matter-of-fact attitude, the writing deftly captures the complexities, contradictions and subtleties of this character. While Nick remains taciturn in his disposition and continues to be averse to any type of emotional introspection, he does begin to question some of his actions, even if only to immediately dismiss delving more deeply into his motivations and feelings. Nick also remains conflicted as to whether he wants to be in a relationship even though he’s seeing Bert on a more regular basis and to a certain degree realises his deepening feelings for him. The author cleverly captures Nick’s indecision about Bert through his refusal to remove the plastic covering from the couch that Bert bought him.

There are several defining moment in this set of stories in respect of the revealing of Nick. One that stands out most is Nick’s response to Bert’s ultimatum about being monogamous – that he won’t stop having sex with other men until Bert moves in with him. Although Nick is unapologetic about this, he is never cruel to Bert and understands Bert’s fear of being outed. At the same time however, Nick’s sense of integrity to himself and what he wants from a relationship, in this instance a deeper commitment from Bert, is quite strong. The re-appearance of Daniel adds another layer of complication to Nick’s life placing him between a rock and a hard place – he cares for Bert, but he’s still in love with Daniel. While Nick does come to a decision, circumstances beyond his control intervene that may ultimately take the decision out of his hands.

The looming spectre of HIV/AIDS is even more pronounced in this compilation as Nick and his friends discuss, in passing, emerging stories of gay men in Los Angeles mysteriously succumbing to pneumonia. Given the historical accuracy and realism with which these stories are written in their depiction of gay life in Chicago circa early 1980s, Mr. Thornton authentically captures the initial reactions of Nick and his circle of friends to this news, which range from apprehension to Nick’s somewhat more aloof attitude. While the reader is fully aware of the future probabilities for these characters given the pandemic that is about to ravage the gay community writ large, the characters themselves rightfully remain oblivious. It is this aspect that adds to the overall sense of foreboding that the writing evokes, only to be further heightened by the ominous ending to the final story.

To say that I thoroughly enjoyed Boystown 2 is an understatement. Nick Nowak remains extremely captivating and the author’s measured dénouement of this character with each story makes him all that more compelling. This is an excellent series that I can’t recommend enough.

Music: Refugee – Tom Petty and the Heartbreakers (Damn The Torpedos, 1979)