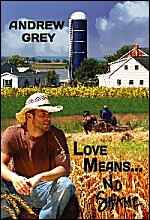 Geoff is in the city, living the gay life to the hilt, when his father’s death convinces him to return to the family farm. Discovering a young Amish man asleep in his barn, Geoff learns that Eli is spending a year away from the community before accepting baptism into the church. Despite their mutual attraction, Geoff is determined not to become involved with him, but Eli has discovered that Geoff shares his feelings and begins to court him, neatly capturing first Geoff’s attention and then his heart.

Their budding relationship is threatened by closed-minded, gossipy relatives and the society at large, a whole new world to Eli, and he must decide whether to return to the community, his family, and the world and future he knows or to stay with Geoff and have faith in the power of love.

Love Means … No Shame by Andrew Grey is a touching story of loss and love, family and belonging. It is very well written with strong characters and fluid narration that pulls the reader completely in from the start.

The central focus of the story is the relationship between Geoff and Eli who come from two very different worlds and cultures. Grey takes his time in growing their relationship by exploring many of their differences in a thoughtful and respectful manner. As Geoff gets to know Eli he realizes that many of the everyday things he takes for granted, such as orange juice and riding in a car are completely foreign to Eli. Eli is spending a year away from his community because he is questioning many aspects of his upbringing and as the story unfolds he accepts that he is gay. If this were known in Eli’s community he would be shamed and banished, as would his family. While Geoff doesn’t understand or agree with these beliefs and practices he is very respectful of Eli as Eli struggles to come to terms with his true self versus his upbringing and religion.

Geoff and Eli slowly get to know one another, first as friends and then through courtship with a slow build-up to the sexual aspect of their relationship. Grey writes Geoff and Eli’s relationship with sweetness and romanticism but also with a sense of realism. Their relationship is not without difficulties. Both Geoff and Eli must deal with mean-spirited members of Geoff’s family and homophobia with some serious implications. Also, as Eli’s year away from home nears its end, he is torn and must make a life-altering decision as to whether he will stay with Geoff, the man he loves, or return to his family and community to lead a life that although is familiar and expected, would ultimately be a lie.

A cast of well-rounded and interesting secondary characters support the main story and characters. There’s Len, the life partner of Geoff’s biological father who he considers his other father, Geoff’s loving aunt Mari, Joey the boy that Geoff takes on as a part-time ranch hand and discretely looks after, and Geoff’s best friend Raine. Grey inter-weaves primary and secondary characters, their feelings and relationships adding a richness and depth to the overall story, but also creating a sense of family among the characters. Although Geoff has lost both his biological parents he’s not alone. He is blessed with a loving and supportive chosen family to which Eli has also become a member.

This story is written with heart. It is both bittersweet and uplifting, and reminds us that love can be generous and selfless and that a true family and sense of belonging don’t necessarily require blood ties.

If you are looking to sink into a well written, poignant, sweet and romantic reading escape then I highly recommend Love Means … No Shame by Andrew Grey.

Mr. Grey is currently working on the prequel to this book, entitled Love Means … Courage which will feature the story of Geoff’s fathers, Cliff and Len. I look forward to reading it.

Love Means … No Shame by Andrew Grey is available at Dreamspinner Press.