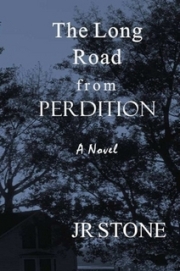 “…It was then that I realized that my lonely childhood had come to a reverberating halt. This moment in time would forever be seared into my psyche, destined to become part of the psychological baggage that I would carry upon my shoulders for the rest of my life. That was how I spent my thirteenth birthday.”

I picked up The Long Road From Perdition with much interest given the story summary and I was not disappointed. In this novel author J.R. Stone has written a moving tale of the life of Nicholas Fontenot, a precocious yet sensitive teenager who lives in an abusive home and is suddenly thrust into a dangerous world, which he must navigate on his own.

On his thirteen birthday, Nicholas witnesses a horrific murder and his world is torn apart. Abandoned by his remaining family he becomes a ward of the state while awaiting news on whether he’ll be charged for the crime he witnessed, but did not commit. He is forced into the foster care system where he experiences even more misery, abuse and danger until he escapes at the age of fifteen. Nicholas draws his strength to persevere and seek a better life for himself from his older brother and protector Josh who is always with him in spirit.

On his journey to find safety, Nicholas meets a kindred spirit in Charley, a drag queen and owner of an off the beaten path gay bar in New Orleans. Charley and a host of colourful characters that work in the bar become Nicholas’ extended family. Yet, his troubled past continues to haunt him until he is tragically forced to leave Charley and New Orleans the only happy home he has ever known. Nicholas’ road from hell and his journey to find peace and his place in the world is a long and difficult one.

END_OF_DOCUMENT_TOKEN_TO_BE_REPLACED

Blain Harrington and his husband Manny Madeira have travelled from Massachusetts to Culver Pines, Alabama to attend Blain’s twentieth high school reunion. During the banquette and slightly before midnight Blain realises that he’s lost track of Manny. While sitting at an empty table he finds paper cocktail napkins with homophobic and derogatory drawings of him and Manny. Now panicked, Blain begins to search for Manny, last seen talking with Patrick McMann an old classmate, but can’t find him anywhere. What he does find is Manny’s cell phone tossed in a tree planter at the hotel. By 1:00 a.m., Blain is at the police station trying to file a missing person’s report with a very uncooperative Culver Pines duty officer. On the advice of his best friend Michael, Blain enlists the help of Rich, a gay-friendly private investigator from Atlanta and the local gay organization to help find Manny. One week later with no news on Manny’s whereabouts, Blain returns home to wait. The dreaded news that he’s feared all along arrives – Manny was found dead in a ravine.