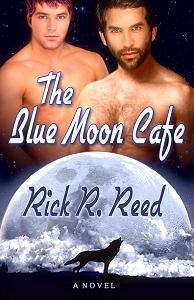 Someone – or something – is killing Seattle’s gay men.

A creature moves through the darkest night, lit only by the full moon, taking them, one by one, from the rain city’s gay gathering areas.

Someone – or something – is falling in love with Thad Matthews.

Against a backdrop of horror and fear, young Thad finds his first true love in the most unlikely of places – a new Italian restaurant called The Blue Moon Café. Sam is everything Thad has ever dreamed of in a man: compassionate, giving, handsome, and with brown eyes Thad feels he could sink into. And Sam can cook! But as the pair’s love begins to grow, so do the questions and uncertainties, the main one being, why do Sam’s unexplained disappearances always coincide with the full moon?

END_OF_DOCUMENT_TOKEN_TO_BE_REPLACED

When Liam makes a scene in the middle of a restaurant after his boyfriend, Brandon, dumps him, he knows Brandon’s cousins, the Delaney twins, will be after him. The Delaneys head up the local gangster scene and are not to be messed with. Liam knows their retribution is imminent, especially since, in the heat of the moment, he threatened to take what he knows (and, really, he doesn’t know much) to the police.

It’s a recipe for disaster.

But when the Delaneys confront Liam, they give him a choice between being shot, or having sex with both of them and Liam senses that his evening might turn out to be rather more interesting than originally expected.

The Delaneys and Me by Anne Brooke is an entertaining and witty ménage short story that provides a good mix of suspense and humour for a relatively angst free read. The story is written in the first person through the central character of Liam, who is quite cheeky and possesses a sarcastic disposition providing for a tongue-in-cheek narrative.

Anne Brooke builds the suspense from the beginning of the story well-capturing Liam’s fear as he continuously looks over his shoulder, awaiting the moment when the Delaney twins, Johnny and Mark, will show up to take their retribution. And show up they do to give Liam an ultimatum as to his choice of punishment – bodily harm or sex with the twins all night long, for as long as they want, in any way they want, until Liam doesn’t know who he is and is “as sore as a cold razor on a winter morning.” Of course Liam chooses sex.

The menacing twins put Liam through his paces, some of which are humiliating, all the while holding a gun on him thereby prolonging his fear and anticipation as he awaits his fate. For his part, Liam accepts their bidding like a trooper, growing progressively more daring in goading Johnny and Mark into bed.

“A cool touch on my cheek almost made me jump. When I glanced to my left, I could see Johnny had eased over the seat so he was right next to me. Somehow, I hadn’t heard him. Now he was stroking my face, his finger moving across my skin. I tried to steady my breathing and, when he touched my mouth, I opened my lips and sucked his finger inside. His breath hitched.”

The author cleverly handles Liam’s predicament which, as he puts it, is a choice between “terrible injury or rape,” and diffuses what is an uncomfortable subject-matter for many readers through Liam’s resourcefulness and tongue-in-cheek attitude. If sex with the twins is the only viable choice of punishment then he may as well enjoy it.

“If I was going to get raped—which was infinitely preferable to getting shot after all—I’d do my level best to make sure I got some kind of fun out of it.”

Another element that adds to the slight edginess of this story is the author’s characterization of enigmatic Johnny and Mark, which not only heightens the suspense and sexual tension in the story but also provides a level of unpredictability as to its outcome. There are several instances throughout the story and right up until the end when the reader is simply not sure as to what the twins will do. The build up throughout the story leads to only one road – a three way between Liam, Johnny and Mark. And while I expected a much hotter sex scene between the three, the scene itself is interesting in that it reveals the true nature of the relationship between Johnny and Mark.

The Delaneys and Me by Anne Brooke is available at Amber Quill (Amber Allure) Press.

Courage. Patriotism. Words rendered meaningless to Erik Chavel when his brother Howard returns home from Afghanistan in a flag-draped casket. Months later, Erik finds the gentle words of Howard’s Marine buddy, Greg, soften his pain. After losing a limb in combat, Greg Simmons understands the raw sorrow of loss. Erik and Greg spend a soul-searching night together and find the unexpected in each other’s company.

END_OF_DOCUMENT_TOKEN_TO_BE_REPLACED

President David Windsor’s former Secret Service agent, Shane Thompson, is now a permanent partner in his life, and David is determined to see Shane receive the respect he deserves as the First Gentleman. Assigned the codename “Falcon,” Shane will be taking on the traditional duties of the First Lady as David, codenamed “Condor One,” continues his administration.

But the tests of the Presidency are still looming as David faces both domestic and foreign political challenges. Just doing his job could mean extreme danger for himself and Shane, the man he loves most in the world—the man David wants to marry, despite all the press and attention it will bring them and the possible repercussions on a run for re-election.

END_OF_DOCUMENT_TOKEN_TO_BE_REPLACED

The business of real life continued to interfere with my reading and reviewing during April and May. Too much work and lack of free time prevented me from reading as many books as I normally would over a two-month period.

On the positive side, virtually all of the books I did read fall into the category of very good to excellent reads. So the theme for Spring 2010 is quality over quantity. I’m starting to get through the backlog of reviews and hope to fall into a more regular pace of reading and reviewing for the month of June.

The One That Stayed by TC Blue (Torquere Press) – Read Review