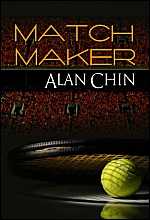 In the four years since being forced off the professional tour for being gay, Daniel Bottega has taught tennis at a second-rate country club. He found a sanctuary to hide from an unkind world, while his lover, Jared Stoderling, fought a losing battle with alcohol addiction to cope with his disappointment of not playing on the pro circuit.

Now Daniel has another chance at the tour by coaching tennis prodigy Connor Lin to a Grand Slam championship win. He shares his chance with Jared by convincing him to return to the pro circuit as Connor’s doubles partner.

Competing on the world tour is challenging enough, but Daniel and Jared also face major media attention, political fallout from the pro association, and a shocking amount of hate that threatens Connor’s career in tennis, Jared’s love for Daniel, and Daniel’s very life.

END_OF_DOCUMENT_TOKEN_TO_BE_REPLACED

Painting By Numbers by David Thyssen is a visceral account of the journeyed descent into hell of an adolescent boy who has been pushed into the darkest of emotional places and as a result, his life and those of many around him end in tragedy. Although a fictional account, the story is based on the author’s own experiences of being bullied and humiliated in school.

END_OF_DOCUMENT_TOKEN_TO_BE_REPLACED

September and October were steady reading months with some very good to excellent reads. Early in September I revisited (and reviewed for the first time) two of my favourite books by gay romance/erotica author Sean Michael – The Center of Earth and Sky and its sequel Painting the Desert now available only in a compilation entitled, Center (Torquere Press), and made a small dent in my reading pile with Tere Michael’s third book in the Faith, Love and Devotion series and the eagerly awaited sequel to Faith & Fidelity – Duty and Devotion (Loose Id). I also had the opportunity to review for Rainbow Reviews The Guardian Angel of South Beach by Neil Plakcy (Loosed Id) an author I’ve been wanting to read for a while, as well as reviewed for Three Dollar Bill Reviews Test of Faith by Aleksndr Voinov and Raev Gray (eXcessica Publishing). Finally, I had the pleasure of reading George Seaton’s Big Diehl: The Road Home (MLR Press) which I reviewed for Three Dillar Bill Reviews and his short story entitled Continuum (Untreed Read) for Rainbow Reviews, both of which I absolutely loved.