When Everything Feels Like The Movies is Raziel Reid’s debut novel and the recipient of the 2014 Governor General’s Literary Award in the category of Children’s and Young Adult Fiction. Mr. Reid received the award at the age of twenty-four, making him the youngest recipient of Canada’s most prestigious and coveted literary award in this category. The book has also been nominated for a Lambda Literary Award for LGBTQ Children’s and Young Adult Fiction, and for The Ferro-Grumley Award, as part of the Triangle Awards. The novel came in second in the Canada Reads 2015 battle of books as the one book to break down barriers.

Inspired by the tragically true story of Larry Forbes King, a fourteen year-old boy from California who was shot in the head by a male classmate whom Larry had asked to be his Valentine, When Everything Feels Like The Movies is at once the raw, funny, disturbing and heart-breaking story of Jude Rothesay, a fifteen year-old junior high schooler in small town “anywhere” and “nowhere” North America.

Openly gay and fiercely glam, Jude has a penchant for pink lip gloss and his mother’s high heels, and dreams of becoming famous. Jude’s school life is harshly oppressive. He is mocked, bullied and beaten. His home life fares little better as dysfunction abounds. Jude lives with his mother who, although does love and accept him, is a stripper with serious self-esteem issues. Jude’s biological father is for the most part absent, and his stepfather is controlling and abusive. Despite the abuse that Jude suffers at school and the neglect at home, there are a few good things in his life – his younger half-brother Keefer who loves Jude unconditionally and whom Jude both loves and protects, his cat Stoned Hairspray, his best and equally outcast friend Angela and his teacher Mr. Dawson.

For Jude, school is just like a movie set, where no one is real and everyone is playing their part. There’s The Crew that make things happen; The Extras who fill the empty desks; and The Movie Stars, whom everyone wants tagged in their Facebook photos. But Jude doesn’t fit in. He’s not part of The Crew because he isn’t about to do anything unless it’s court-appointed; he’s not an Extra because nothing about him is anonymous; and he’s not a Movie Star because even though everyone knows his name like an A-lister, he isn’t invited to the cool parties. As the director calls action, Jude is the flamer that lights the set on fire.

END_OF_DOCUMENT_TOKEN_TO_BE_REPLACED

‘Nathan Burgoine grew up a reader and studied literature in university while making a living as a bookseller – a job he still does, and still loves. A cat lover, ‘Nathan managed to fall in love and marry Daniel, who is a confirmed dog person. Their ongoing “cat or dog?” détente continues and according to ‘Nathan will likely end with the acquisition of a dog. They live in Ottawa, Canada, where socialized health care and gay marriage have yet to cause the sky to cave in. 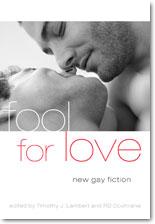 My introduction to ‘Nathan’s writing came by way of his first published short story “Heart” a beautiful and poignant tale of love and loss, which appeared in the critically acclaimed 2009 Cleis Press anthology Fool for Love: New Gay Fiction. My introduction to ‘Nathan came about while I was on the hunt for a second print copy of Fool For Love (my first one had fallen apart from re-reading). Coincidentally, the only bookstore in Ottawa that wasn’t sold out of copies was ‘Nathan’s, and a great thing happened when I got to the bookstore – I met one of the authors of one of my favourite anthologies.

Since the publication of “Heart,” ‘Nathan’s had over two-dozen stories appear in anthologies by some of the best publishers of LGBTQ fiction, including in: Men of the Mean Streets: Gay Noir and Boys of Summer (Bold Strokes Books); Tented, a Lambda Literary Award finalist and The Touch of The Sea (Lethe Press); and Afternoon Pleasures: Erotica for Gay Couples (Cleis Press).

Not only a writer of short stories, ‘Nathan’s also an avid reader of short fiction and combines insightful reviews of the stories he’s read with equally thoughtful observations about, among others, his experiences as a bookseller through his Short Story 365 Series.

His first novel Light was released by Bold Strokes Books earlier this week, and to mark the occasion I invited ‘Nathan to participate in an author Q & A here at Indie Reviews.