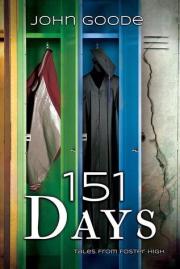 Aptly entitled 151 Days, Book 6 in the Tales From Foster High series chronicles just that – the last 151 days of high school until graduation for Kyle Stilleno and his boyfriend Brad Greymark. It is Mr. Goode’s best-written instalment in the series to date, as with each successive book the author raises his own bar in terms of writing quality, character development and overall story advancement.

151 Days picks up immediately following events in Book 4, End of the Innocence. It is a turbulent time for Kyle, Brad and their friends as they continue to deal with the aftermath of Kelly’s death. With their support, Kyle sets out to form a Gay-Straight Alliance (GSA) in Foster High as a means of raising awareness and promoting tolerance so that what happened to Kelly never happens again. But life continues to unfold and the GSA is not their only going concern as choices and decisions must be made about love, sex, graduation, college and their future beyond Foster, Texas. At the same time they must face the circumstances surrounding Kelly’s death and a situation that threatens to lead to yet another tragedy at Foster High.

END_OF_DOCUMENT_TOKEN_TO_BE_REPLACED 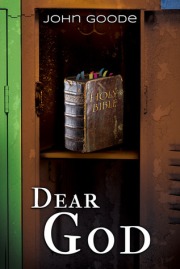 Dear God by John Goode is a deleted chapter from End of the Innocence, the fourth book in the Tales From Foster High Series, which was excluded from the book because the author felt it would have slowed the pace of the story, but important enough in its subject matter to be released as a short story. In this short piece, Kyle goes to a local church in search of understanding and answers on God, the Bible and Christianity’s treatment of homosexuality as a means of fighting prejudice and those using religion against his friend. His inquiry leads him to some surprising conclusions and forces him to re-examine his own beliefs.

As with all the books in the series, Dear God is well written, and I enjoyed this short fiction for what it is – a means of delving further into the character of Kyle Stilleno, one of the main protagonists in this series, and at the same time examining the issues of Christianity and its treatment of homosexuality, within the context of the overall story arc.

END_OF_DOCUMENT_TOKEN_TO_BE_REPLACED 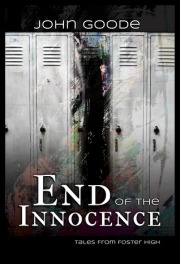 End of the Innocence is the fourth book and the first full-length novel in the Tales From Foster High series. It is an incredibly moving and thought-provoking multi-themed story in which author John Goode throws the doors of Foster High wide open to grow Kyle and Brad’s world by focusing on not only what is happening to them, but also on what is happening all around them, further developing secondary characters and introducing new ones.

In doing so Mr. Goode examines the issues of homophobia, forced outing, marginalisation and cyber bullying from all angles and blurs the lines between bully and victim. The author also deals with the issue of gay teen suicide head on, with the same sensitivity and respect that he’s written all the books in this series. There are tragic events that transpire in this story that are transformative for both Kyle and Brad, their friends and the entire town of Foster. They are also a turning point for the series as a whole.

I found this instalment in the series the most powerful and the best written to date. This is saying a lot because I consider all the books in the series to be extremely well written. What make this particular book stand out so are Mr. Goode’s courage and care in the execution of this story. Courage in tackling with realism extremely difficult subject matter, and care in how the issues are depicted all the while ensuring the integrity of the overall story and its characters. And despite the ugliness of some of the events and the tragedy that ensues as a result, the story conveys incredibly important messages while at the same time leaving the reader with a sense of hope.

END_OF_DOCUMENT_TOKEN_TO_BE_REPLACED

My introduction to the writing of John Goode came by way of his debut novella Maybe With A Chance of Certainty, the first book in the Tales From Foster High Series published in October 2011 by Dreamspinner Press. While reading the story I quickly fell in love with Mr. Goode’s writing and in particular his characterisation. The compilation of the first three books in the series, entitled Tales From Foster High, made the list of my Best in LGBTQ Literature for 2012. Since then, the author has been quite busy with over ten published works under his belt, to date, in the realms of gay young adult and adult-themed contemporary fiction, science fiction, fantasy and romance. On the occasion of the release of the latest instalment in the Foster High books, Taking Chances, I invited John to participate in an Author Question & Answer at Indie Reviews.