When I began writing this post I had the intention of listing ten of my favourite books in gay fiction for 2010. But it quickly became apparent that it would be impossible to restrict the list to only ten. Despite the fact that my reading time was more limited over 2010 due to the demands of real life and work and I read much less than in previous years, there were too many reading gems that I did read and could not omit from the year’s best.

Over the course of the year I made several wonderful discoveries in new-to-me authors, finally got around to reading books that had been sitting on my shelves for years, I received some great recommendations from online friends, some of my favourite authors released incredible stories and I gave myself permission to re-read some past favourites without guilt.

In the end, twenty books (novels, novellas, anthologies and short stories) made the final cut of my best in gay fiction for 2010 across several genres – contemporary, erotica, horror, historical, mystery, romance and young adult. Some were weighty stories, others lighter fare with happy endings, and several had unforgettable characters that continued to haunt me long after I was done reading their stories. But all the books listed as my best of 2010 in their own way dealt with the stuff of life and fed my mind, heart and soul.

END_OF_DOCUMENT_TOKEN_TO_BE_REPLACED

March was a relatively productive reading month with two exceptional stories, The Summer Between by Andrew Binks and The Decade of Blind Dates by Richard Alther. I also read and reviewed the latest installment of Andrew Grey’s Love Means Series, Love Means … No Boundaries and a sweet western/cowboy m/m romance by Leiland Dale entitled, When The Blue Bird Calls. 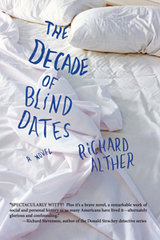 Peter Bauman, a forty-five-year-old divorced gay painter, plunges into the personal ads just prior to the Internet in his quest for the perfect partner.

He dates a colorful cast of characters from a Connecticut physician, a rabid Republican, to a Texas-two-stepping, tattooed punk. Next there’s the heavier-than-advertised geek who arrives with a bag of sex toys, but Peter is more serious with a handsome, stern Maine woodsman, followed by a British aristocrat patron who declines further intimacy because of his AIDS.

As Peter negotiates his new gay identity, his best friend, Barry, counsels and supports him at every step, especially as Peter deals with a health crisis. During a decade of sex and shenanigans, Peter, encouraged by his ex-wife, daughter, and son, examines his life and, at last, discovers his soul mate.